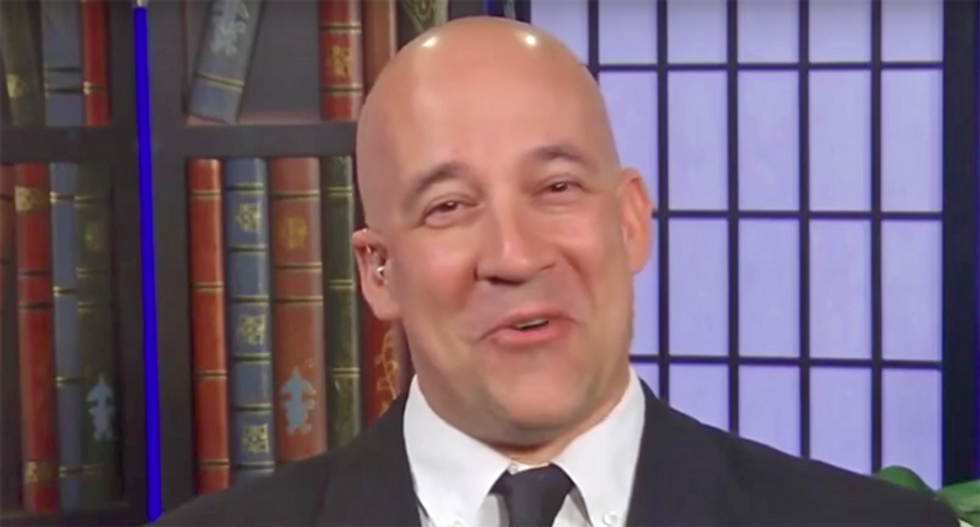 With all eyes on the Alabama special election to fill the US Senate seat vacated by Attorney General Jeff Sessions, MSNBC anchor Katy Tur blasted the "atrocious and appalling" efforts to elect ousted Chief Justice Roy Moore despite credible allegations of sexual assault by the GOP nominee.

"Glenn, does he need to come out and say Roy Moore should not be a senator for Alabama and that he does need to step aside?" Tur asked New York Times White House correspondent Glenn Thrush.

"Look, I don't know what he needs to say," Thrush replied. "The question is, how far is he willing to go to alienate voters in Alabama?"

"What people forget is in a lot of ways Donald Trump's campaign began with that Mobile rally. That might be overstating it, but that was the moment when Jeff Sessions stood on stage, put on the MAGA hat, they did the flyover. That was the moment a lot people thought it came together and to some extent Donald Trump's America is Sweet Home Alabama."

"Twenty-thousand people showed up for that rally and that was the turning point where people started to realize, hey maybe this might not be a fad," Tur reminded.

Some people have speculated that President Trump has remained silent on the Roy Moore sexual abuse allegations because the commander in chief has also faced extensive and credible sexual assault allegations. Others have suggested President Trump is waiting to hear Fox News anchor Sean Hannity's final judgement.

"Josh, how does a record like this go without scrutiny throughout the primary race?" Tur asked correspondent Josh Moon of the Montgomery-based Alabama Reporter.

"You know, it's a good question," Moon admitted. "But in Roy Moore context and in Roy Moore's world here, he gives you enough information, that a lot of the things like this that you have to go searching out gets buried by the avalanche of other things he does."

"I mean, I think y'all had some experience at MSNBC today with Roy Moore's attorney, so you know I think we owe a lot of people some apology for unleashing this amount of crazy upon the rest of the country," Moon acknowledged.

"This clown show is one step away from being one of 100 people who play an important role in shaping the country," Moon wrote. "And now the locals around Gadsden, emboldened by the sudden exposure of juicy town secrets, have started to spill the beans on a host of creepy Roy Moore stories."

Moore is "the lesson GOP voters nationally — who just watched their party be kidnapped by racists and a Russian sellout — need," Moore concluded. "Because they need to learn the consequences of voting based on fear and greed, instead of on the betterment of all people and fairness. That’s what this is really about."

"That fear of change and of anyone or anything slightly different has ruled the Alabama voting booth since this place was founded. And greed has followed a close second," Moore explained. "The people of this state — generation after generation of people in this state — have been shown the consequences of such ignorance. And yet, time and again, election after election, the voting majority in this state enter voting booths and pick the people who promise to protect Confederate monuments and cut their paltry taxes and put prayer back in schools and force store clerks to say Merry freakin’ Christmas."

"And then, when it all inevitably blows up in our faces, and we’re left a steaming pile of national embarrassment by these conmen and charlatans, these same voters have the gall to shake their heads in disgust, throw up their hands and proclaim that Alabama deserves better than this," Moon reminded. "But the sad fact is we don’t."

"Why do Alabama voters keep electing people like this?" Tur wondered.

"They get caught up in this conservative bubble of news, just like the Roy Moore supporters now. All of this stuff is not deterring them, they're still going to support this man because they believe it's fake news and they believe him and he waves the Bible a lot and he loves that," Moon explained. "So that draws a lot of people here and out of this fear of anything different, a fear of attacks on Christianity, fears of their children running into anyone who doesn't look like them, those are the things that have driven this to the point with this amount of corruption in this state."

"No, Doug Jones is not a bleeding heart liberal progressive," Moon answered. "He obviously has views that tend more towards the Democratic side and he is more of a liberal candidate, which is not saying much for Alabama but he's not -- he's not some liberal guy and he is a guy who is a genuine person and a person that you could have a conversation with and not come away thinking he's a crazy person."

"It's so ludicrous, it makes you want to laugh, but it's serious," Tur noted.

"Someone trying to impersonate a reporter and discredit real journalism is atrocious and appalling," Tur concluded, before thanking her panelists for being real journalists.