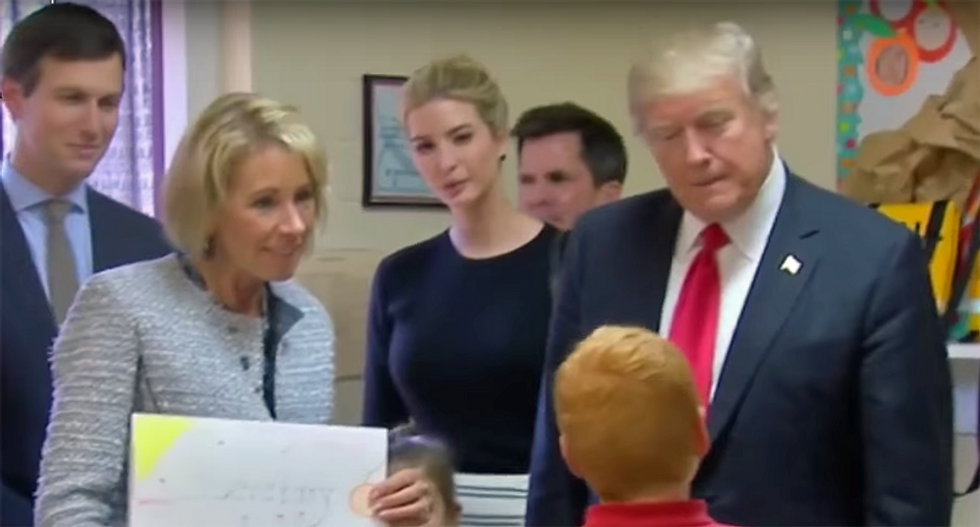 At least 20 families have multiple members serving in the Trump administration, including the president's most prominent campaign supporters.

President Donald Trump's daughter Ivanka and son-in-law Jared Kushner, who each serve as White House advisers, are the most prominent examples in an administration packed with family members and spouses, reported The Daily Beast.

Other presidents, from John Adams to John F. Kennedy, have included family members in their administration, but Trump's administration is defined by blood relations.

Eric Trump's brother-in-law Kyle Yunaska was promoted this month to chief of staff for the department’s Office of Energy Policy and Systems Analysis, despite scant background in energy policy.

Education Secretary Betsy DeVos was rewarded with a Cabinet position after her family donated more than $200 million to Republican campaigns, and her husband Dick DeVos Jr. was given an appointment to the Federal Aviation Administration’s Management Advisory Council.

Her sister-in-law Pamella DeVos was given a spot on the advisory board for the John F. Kennedy Center for the Performing Arts, and her brother Erik Prince was an informal adviser to the White House transition team.

White House senior counsel Don McGahn's wife Sharron McGahn was hired in May as a policy adviser to Treasury Secretary Steven Mnuchin, and the husband to McGahn's chief of staff was nominated to a federal judgeship in Alabama.

That nominee, Brett Talley, failed to disclose that his wife Annie Donaldson worked in the White House, and the recent law school graduate has never tried a case in court.

The son of prominent Trump supporter Rudy Giuliani was hired in March as associate director of the White House Office of Public Liaison, after his pro golfing career ended.

Former White House adviser Sebastian Gorka's wife, Katharine, remains in a post at the Department of Homeland Security, although her husband was dumped from the administration in August.

Other appointees combine family relations with another Trump administration trend: federal officials overseeing or regulating industries in which they once worked.

Uttah Dhillon, former House Financial Services Committee Oversight Counsel, was appointed as a senior assistant to the president in January, and his wife Janet was named Equal Employment Opportunity commissioner -- which regulates two of her former employers that have been accused of discriminatory actions.

Trump’s deputy secretary of Housing and Urban Development, Pamela Patenaude, led a foundation that promotes housing policy reform, and her daughter Meghan serves as deputy assistant for scheduling to Vice President Mike Pence, and another daughter, Caitlin, works as a policy adviser at the Department of Health and Human Services.