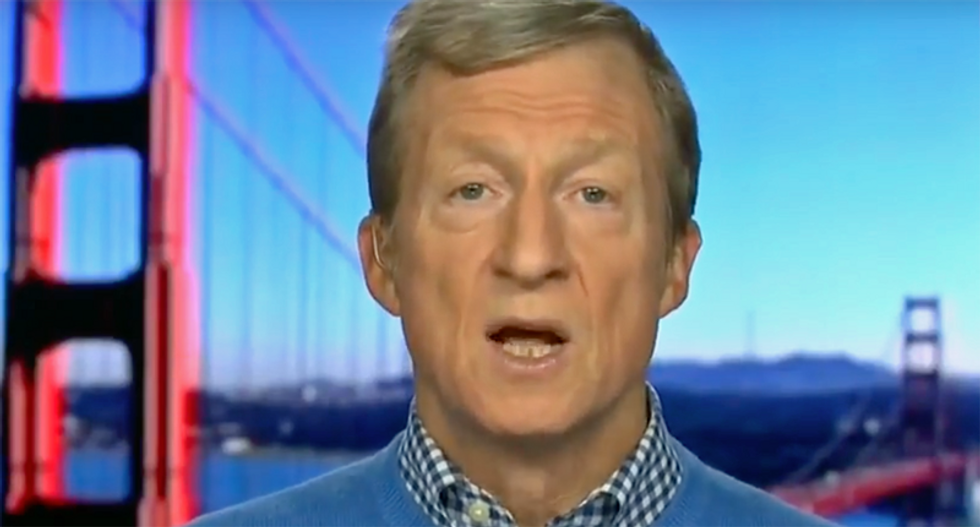 Tom Steyer, the billionaire founder of Farallon Capital, on CNN to discuss his investment of $20 million in ads calling for the impeachment of President Donald Trump.

CNN anchor and talk radio host Michael Smerconish brought to the airways Saturday the debate among progressives as to whether Democrats should fight to impeach President Donald Trump.

CNN's Smerconish asked Steyer to make his case for removing Trump from office.

"Well Michael, I think there's no question the president has obstructed justice in his firing of the head of the FBI, which he said he did because he persisted in the Russia investigation," Steyer reminded. "And I think that he has broken the Emoluments Clause virtually on a daily basis. And I think that his public request for the justice department to do a criminal investigation of his political opponents is also a clear abuse of power."

"In effect, what the Constitution says about impeachment is that the president cannot be allowed to violate his trust with the American people and the spirit of his office," Steyer explained. "And he's clearly done that."

Smerconish, a former staffer to George HW Bush, pushed back by asking if removing Trump from office would create a precedent Democrats might someday regret.

"He has committed these infractions, committed these acts in public. We don't need to go through the tapes of his phone calls or tapes of e-mails because he's done it right in front of our eyes and then he's admitted it," Steyer noted. "This is a president who is a clear and present danger to the American people."

President Trump is worried about having so many ads aired against him. In October, he lashed out at Steyer.

That tweet preceded Steyer's announcement that he was doubling his investment, from $10 million to $20 million.