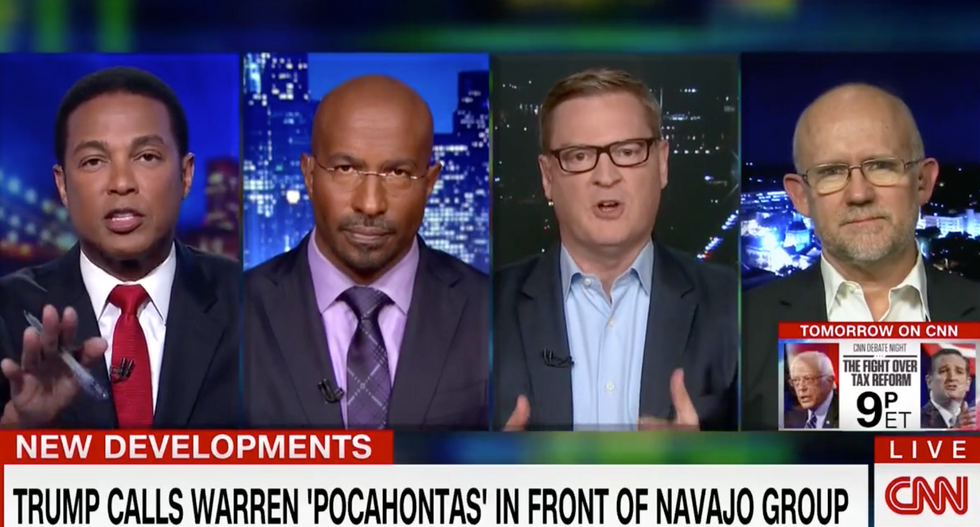 "How can Sarah Sanders stand there at the podium and say, ‘Oh it’s not a slur, the president doesn't mean it as a slur,’” host Don Lemon asked, referring to Trump’s comments at a Native American World War II veteran tribute in the Oval Office on Monday, and Sanders' subsequent claim it was not a racial attack on Warren.

“Don, the reason she does that is because her job is contingent on her being a serial, congenital liar in defense of Donald Trump’s latest outrages,” Wilson opined. “She probably has some tiny, shriveled husk left in her soul where she realizes this is the wrong thing to do, but she does it anyway because otherwise they’ll replace her.”

Trump defender Mike Shields countered that every press secretary “advocates on behalf of the president,” but Wilson was not buying it.

“Instead she goes out and tries to bury people in an avalanche of horsesh*t every day, because this is her job,” Wilson continued. “I get that's her job. The White House press secretary has to defend the indefensible. In very few other cases in our modern history, has the press secretary had to go out and defend someone who is slinging stuff that is demonstrably racially charged.”

Shields tried to argue that Barack Obama’s press secretary lied when he told reporters, “If you want your doctor, you can keep your doctor.”

“Yeah, but how racial was that?” Wilson asked. “There’s a difference in arguing and advocating for policy, and going out and defending--

"Don, you asked, ‘What's going on here, what's going on in the country?’" Shields said, cutting Wilson off. "We just had the best Black Friday and Cyber Monday that we've had in 20 years, the economy is booming.”

“What does that have to do with calling someone a racial slur?” Lemon asked.

“It makes racism totally cool then?” Wilson chimed in.

Watch the segment below, via CNN: