CNN's Jeff Toobin smacks down Don Jr. Wikileaks defense: 'It's like saying I only robbed a few banks' 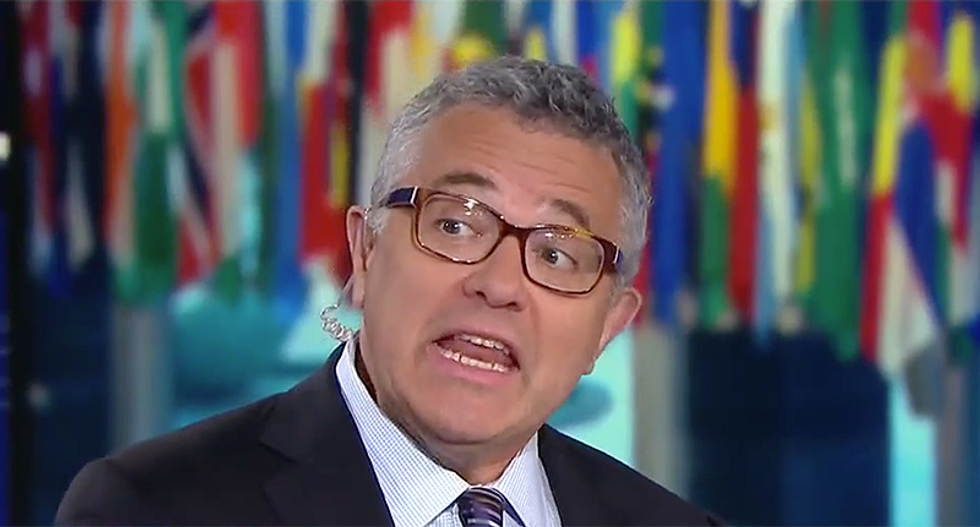 Donald Trump Jr. defended himself in released communications with Wikileaks by claiming that it was merely a few small messages and nothing meaningful. However, CNN legal analyst Jeffrey Toobin said that's not a defense.

"Don Jr. in his defense was saying look at the direct messages, I only responded a couple times," said Caitlin Huey-Burns of RealClearPolitics. "If you look at the timeline, it shows that's not necessarily true. You can count these Twitter interactions or messages as interactions, too. This is the second instance where Don Jr. is at least open to engaging with foreign adversaries here."

Former Trump campaign staffer Jason Miller defended Trump Jr. by saying he was "scared" of Wikileaks and that's why he played nice. However, it was Toobin that called the defense from Trump Jr. a poor defense for illegal behavior.

"I wanted to make a point well, 'I only responded to a couple messages.' It's not a defense to bank robbery that you only robbed a couple of banks. You don't have to commit multiple crimes to be guilty of a crime," Toobin said.

The Atlantic reported that the timeline of tweets from President Donald Trump's account as well as Trump Jr. may not have responded to direct messages, but they later tweeted out what was requested by Wikileaks or made a comment about it. Trump even took the comments live praising Wikileaks in a campaign speech. The communications reveal Trump or someone controlling Trump's Twitter account knew of Wikileaks' participation in the hacks and information being leaked.

Trump Jr.'s attorney released a statement in the wake of the release of the communications with Wikileaks, saying he has cooperated with the committees and investigations and turned over "thousands of documents in response to their requests." The statement also claimed they have "no concerns about these documents and any questions raised about them have been easily answered in the appropriate forum."

Coordinating with Wikileaks risks a campaign financial violation at a minimum, according to legal experts, and allegations of conspiracy at worst. Rep. Jackie Speier (D-CA) told CNN Tuesday that she thinks this latest round of information is evidence of both coordination and conspiracy, both of which are illegal.

Release of the information also nabbed Mike Pence, who told Fox News there was no way the campaign was working with Wikileaks on the same day Trump Jr. tweeted out a link they sent.

A man who participated in the January 6th riots at the United States Capitol building took shots of Fireball Cinnamon Whisky after breaking into House Speaker Nancy Pelosi's office, a witness has told investigators.

News 4 San Antonio reports that Canyon Lake, Texas resident Treniss Jewell Evans III was ratted out by a "family acquaintance" who had been told that Evans "went inside Pelosi's office to take shots of the liquor" during the riots.