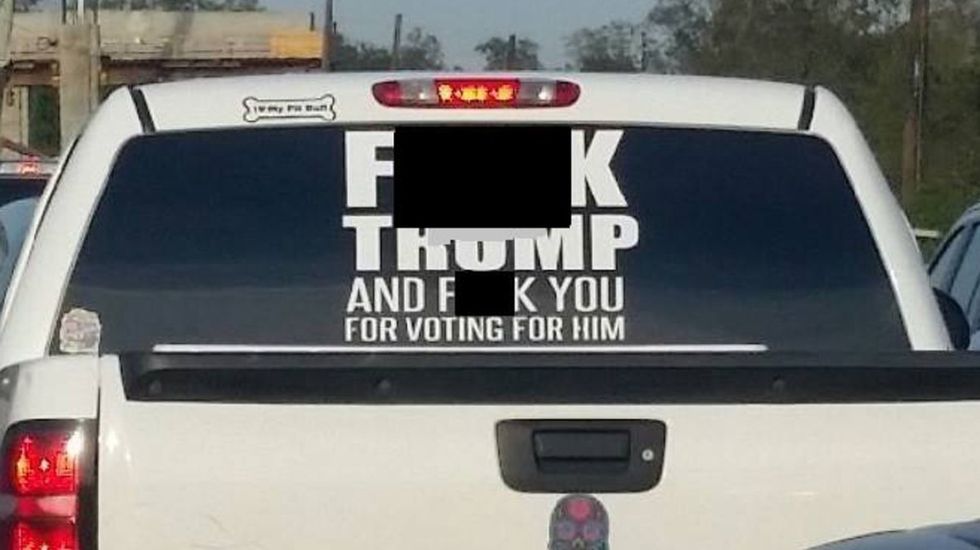 A bumper sticker on the back of a Texas woman's truck that reads "f*ck Trump and f*ck you for voting for him." Image via Twitter.

The woman whose huge"F*CK TRUMP" sticker went viral has been arrested.

According to the Houston Chronicle, Karen Fonseca, the driver with the large anti-Trump sticker, was arrested on an outstanding warrant Thursday. Her warrant was based on fraud charges and her bail was set to $1,500 shortly after her 2 PM arrest.

As the Chronicle's report notes, Fonseca's husband owns the truck, but she often drives it.

Soon after, the American Civil Liberties Union's Texas chapter jumped into the fray, reminding Sheriff Troy Nehls that Fonseca has a constitutional right to post the sticker on her vehicle despite the profanity it uses.

Fonseca told the Chronicle she used to work with Sheriff Nehls at the county jail, and that this was far from the first time the sticker on the truck she shares with her husband has been noticed by law enforcement. She said in the past, officers have pulled her over but "failed to find a reason to write a ticket."

Fonseca also said she does not intend to contact her former co-worker, who the report notes has a history of controversial remarks, including that "criminals who enter Fort Bend County could leave in a body bag."