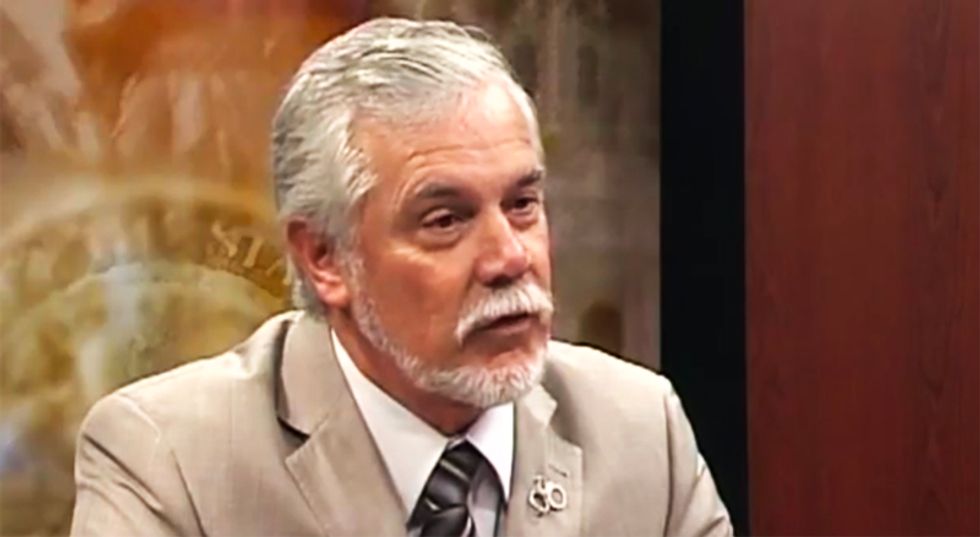 A Minnesota Republican lawmaker is under fire for sending abusive texts to a female colleague and reportedly sexually assaulting a female lobbyist in his office while insisting she help him with his "raging b*ner."

According to the City Paper, state Rep. Tony Cornish under attack after he was accused of sending unwanted sexual comments to Rep. Erin Maye Quade (DFL), who provided text messages to a local paper.

Late Thursday night, Cornish had his chairmanship of the House Public Safety Committee suspended by House Speaker Kurt Daudt (R) while the allegations are being investigated.

More damning, however, are charges from a female lobbyist, who wished to remain anonymous, who claimed Cornish stalked her and solicited her for sex for over a year, once physically grabbing her in his office while trying to kiss her.

According to the woman, Cornish once blocked her from leaving his office, repeatedly telling her, "I have a raging boner. You can't leave."

Confronted with the accusations, Cornish denied the assaults,  but did admit to inappropriately texting women, explaining: "I'm an adult. I'm not a saint."

The accusations against Cornish come at a time when DFL Sen. Dan Schoen is facing demands from his own party’s leaders to resign after he was accused of sexual harassment by multiple women.

The accusations against Schoen include physically grabbing women as well as sending pictures of his genitalia via Snapchat.

Republican senators are ripping Sen. Josh Hawley, R-Mo., for casting the lone vote to reject Finland and Sweden's admission to NATO as tensions between the U.S. and Russia continue to escalate.

Hawley's solitary vote came on Wednesday amid a bipartisan push to pass a resolution that would allow NATO membership for both countries, a move that advocates have argued is a "slam dunk" for bolstering national security.

After being established in Atlanta in 2019, the Black Hammer Party made a name for itself as a Black nationalist organization that espouses anti-colonialist, antisemitic, and even far-right views. The group's leader, 36-year-old Augustus Claudius Romain Jr., who goes by Gazi Kodzo, was arrested last month along with 21-year-old Xavier “Keno” Rushin, The Atlanta Journal-Constitution reports.

Kodzo and Rushin are accused of holding two men at gunpoint inside the group’s headquarters in Fayetteville while Kodzo forcibly sodomized one of them. When police responded to a 911 call from inside the house from someone claiming they had been kidnapped by the group, they found 18-year-old Amonte “AP” Adams, dead, reportedly from a self-inflicted gunshot wound.