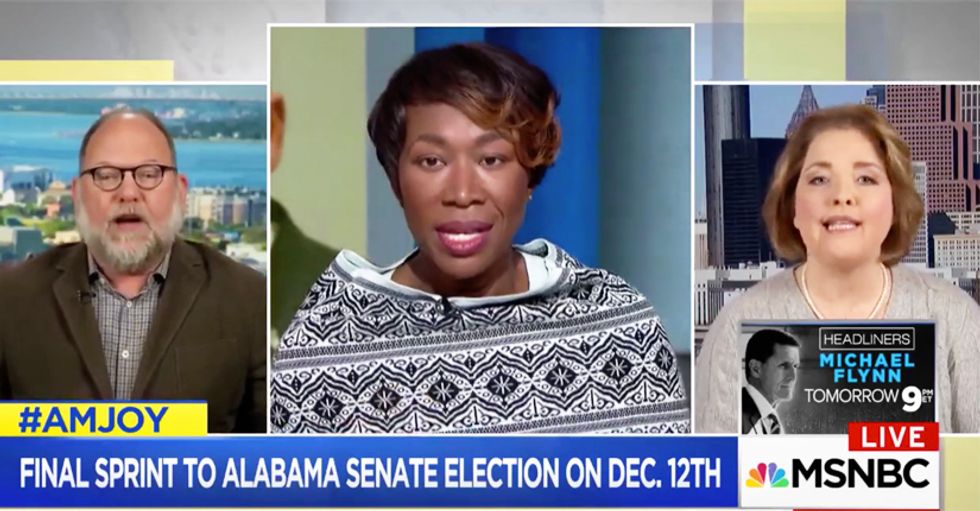 An MSNBC interview with both a victim of child abuse and one of Alabama Senate candidate Roy Moore's most staunch Christian defenders turned into a shouting match as the Moore supporter was told she was "disgusting" for supporting the judge accused of child abuse.

With host Reid in the middle, Women for Roy Moore founder Amy Kremer defended the candidate saying it is the court of public opinion -- meaning Alabama voters -- that should deciding factor over whether Moore is seated should he win election.

"I think Alabama is going to decide," Kremer explained. "What's really relevant here is that the people across this country are tired of Washington sticking their nose into everybody's business and trying to choose the candidates and the races."

According to Jimmy Williams, a former aide to Sen Dick Durbin (D-IL ) -- and a childhood sexual abuse survivor -- Kremer is only supporting Moore because he is a Republican -- allegations be damned.

"I was just wonder something," Williams asked. "If Roy Moore -- Donald Trump said I could stand in the middle of 5th Avenue and shoot somebody and I'd still get elected. He was right. If Roy Moore did exactly the same thing, they're going to stand by him because he's Republican. I'm fine with Republicans owning Republicans. I'm totally okay with that. I just think that you have to do that when you own them, you have to own everything about them. Literally everything. And if he's a segregationist or a homophobe or a misogynist, you have to own that. That's your party."

"I could say the same thing about Democrats," Kremer shot back. "That's one of the big problems in Washington D.C., it's all about party politics. We need to look at issues in America," with Kremer basing her defense of Moore on the fact that she has a daughter.

"Can i just say one thing quickly?" Williams insisted. "As a victim of child molestation I think it's disgusting that Amy would support a child molester."