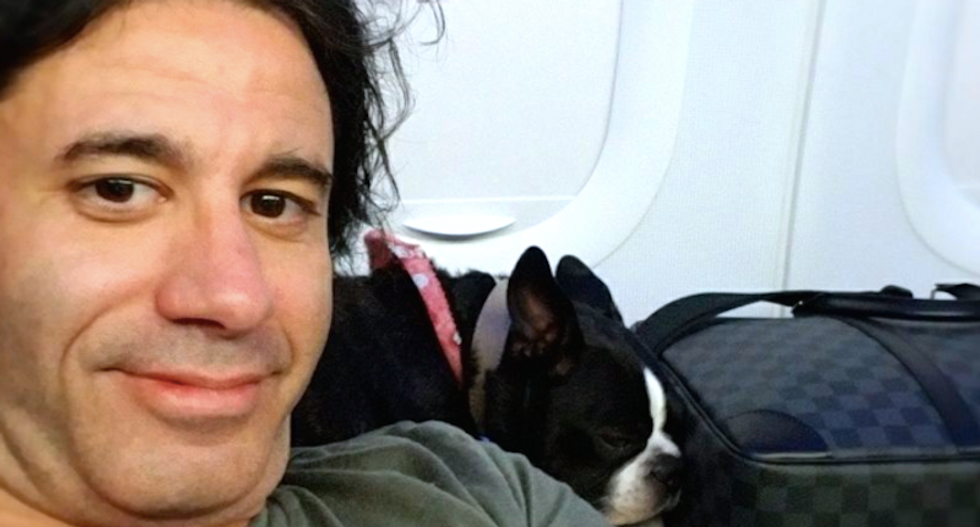 An alt-right troll who sells "Pepe the Frog" hot sauce mocking immigrants and disabled children lives a jet-setting lifestyle that's at least partially subsidized by his wife's salary as a pharmaceutical executive.

Jeremy Bernstein says he's lost about $4,000 trying to sell the hot sauce to racist and neo-Nazis on 4chan and other websites, and now he's facing a legal challenge from the cartoon frog's creator, reported the Miami New Times.

The 42-year-old Bernstein plans on ignoring a demand by Pepe creator Matt Furie, who never intended the character to become a mascot for racist fans of President Donald Trump.

“I got cease-and-desisted by WilmerHale,” Bernstein told New Times, referring to Furie's attorneys. “But Furie doesn’t have a trademark on it. They can’t cease-and-desist me. They tried, but he never trademarked it.”

Bernstein is selling Hot Pepe’s "Over the Wall" Hot Sauce for $9.95 a bottle but claims he loses money on every bottle he sells.

"It's a net-loss product," he told the newspaper. "There's not really a worse business you can do than ship a bottle of hot sauce around the country."

Bernstein splits time between Miami and New York, but he won't reveal what he does for a living and told the newspaper only that he has a "technology background" and got into "Bitcoin and some other things real early."

His wife, Elizabeth Golden, is a vice president for the pharmaceutical giant Pfizer, and his Facebook profile suggests he often travels with her by private jet.

Golden serves as the company's vice president of external affairs and worldwide communications, and she previously served as deputy head of communications at Columbia University and as communications and marketing officer at Citigroup.

Bernstein briefly blogged earlier this year for Big League Politics, a pro-Trump website tied to Cassandra Fairbanks, a former Sputnik writer whose communications with the Guccifer 2.0 hacker have been turned over to the Justice Department.

Still, he insisted to the New Times that he had no connections to alt-right activists on Reddit and 4chan, although his hot sauce marketing campaign was based on a cruel joke circulated in those forums about autistic children.

"It was originally intended to be a chicken-tendie sauce, like, you know, 'These autistic kids go crazy about chicken tendies,'" Bernstein said. "So it's a spicy tendie sauce. But it's actually a very tasty hot sauce."