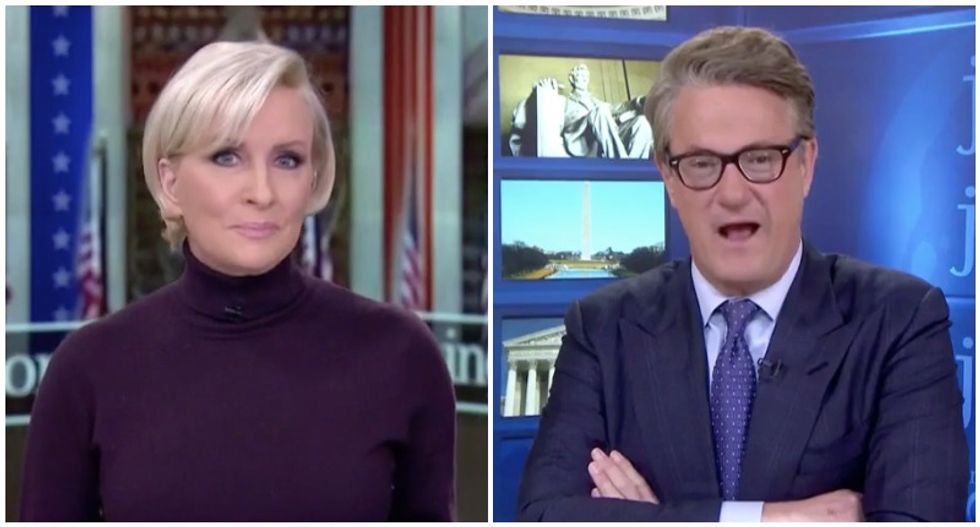 The MSNBC program hosted Rep. Jim Himes (D-CT) to discuss the latest developments in the probe, including efforts by Republican lawmakers and Fox News to discredit Mueller and his investigation.

A new report by NBC News shows the White House concluded in late winter that Mike Flynn had lied to FBI agents, which means Trump was aware his former national security adviser was in legal jeopardy when he fired FBI director James Comey on May 9.

But MSNBC's Ari Melber said Trump had already publicly confessed to firing Comey over his handling of the Russia probe during a May 11 interview with NBC News.

"Isn't the funny part here that we also have tapes but they were made by Lester Holt?" Melber said. "I mean the president said something on TV that if it were a secret tape, if we found the secret tape of him saying, 'Russia was on my mind when I fired the FBI director.' It would actually look worse, but it just all happened live."

Co-host Mika Brzezinski giggled as she agreed Melber was right, that those nationally broadcast recordings would be potentially damning if they had been revealed another way, and Himes agreed other Trump campaign associates -- including his family members -- had also signaled corrupt intentions.

"Don Jr. in meeting, you know, in his Trump Tower meeting where he's looking and excited of getting dirt about Hillary Clinton, it was all about the e-mails," Himes said, laughing. "Maybe they're not tapes, but we live in a world with a lot more evidence."

Host Joe Scarborough said Mueller had two other key pieces of evidence already on the public record from the week Trump fired Comey.

"Sarah Huckabee Sanders' statement the next day, where she says he wanted to finish the investigation so he got rid of him, you've got intent from that White House statement," Scarborough said. "Finally, the smoking gun of all smoking guns, the White House released a conversation between Donald Trump and the Russian foreign minister and the Russian ambassador to the United States and congressman, you got the president of the United States saying, 'Hey, I got the pressure off, this guy is a real nut job. I fired him, so now the pressure is off on this investigation.' So guess what? Donald Trump colluding with the government of the two people that were inside that Oval Office."

Scarborough said the admission was the type of evidence prosecutors dream of finding.

"This is the sort of thing when I was an attorney and we were digging through old depositions or we were digging through discovery or digging through documents, this would be the sort of thing that you would pull out of a thick file, and you would run down and go in to your senior partner and say,'I found, I found it -- this guy's busted,'" Scarborough said. "Except for the fact he did it in plain sight, he admitted it in plain sight with Lester Holt, with the Russian foreign minister, with the Russian ambassador of the United States, and then had his White House spokesperson do it."