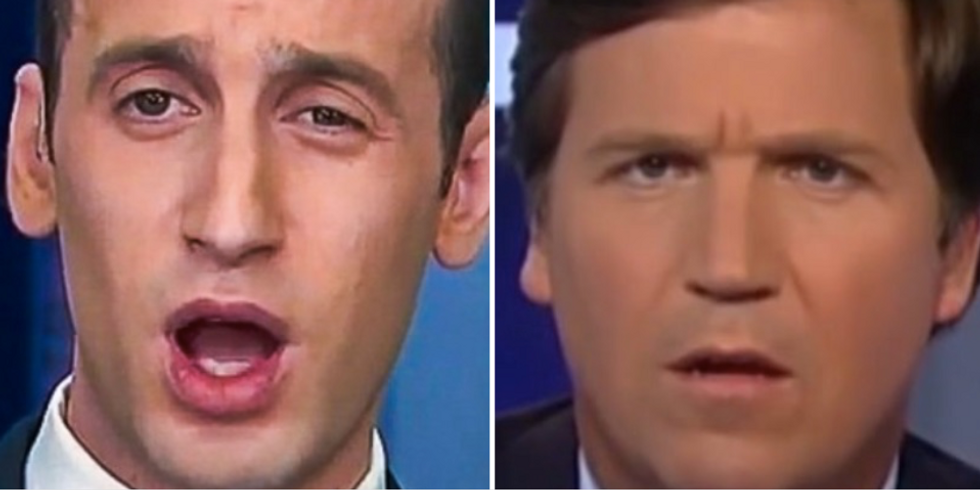 On Thursday, Politico's Jennifer Mendelsohn wrote that many of President Donald Trump's staunchest anti-immigrant allies are descended from immigrants who would not have been eligible to remain in the U.S. under the administration's current policies.

As Immigration and Customs Enforcement (ICE) officials conduct a massive roundup of undocumented workers, Mendelsohn said that it's worth pointing out that Tucker Carlson, Dan Scavino, Jr. and other anti-immigration figures have ancestors who would have been forced to leave the country under the Trump administration's policies.

"From White House adviser Stephen Miller to Fox News commentator Tomi Lahren, many prominent anti-immigration voices advocate for immigration policies like merit-based systems and language-based preferences that would have barred their own families from coming to the United States," Politico said.

"But while our favorite immigration opponents may have forgotten their immigrant roots, lucky for them, I have an Ancestry.com account, and I know how to use it," said Mendelsohn.

Scavino is the great-grandson of Davide “Gildo” Ernemegildo, who arrived in the U.S. in the early 1900s along with his day laborer and factory worker brothers. They were followed by sisters and the family patriarch, who were detained at Ellis Island out of fear they wouldn't be able to support themselves.

Stephen Miller -- a nativist and accused white supremacist -- is descended from Eastern European Jews who arrived in the U.S. penniless. His grandmother would be eligible for deportation under today's rules because in the 1910 census, she is listed as speaking only Yiddish in spite of four years in the country.

As Mendelsohn has reported before, Tomi Lahren's great-grandfather Constantine Dietrich was indicted by a grand jury on charges he forged his citizenship papers.

Tucker Carlson's great-great-grandfather was Cesar Lombardi, a Swiss immigrant who came to the U.S. to escape the narrowness of economic opportunity in Europe. He landed in New York City on Nov. 1, 1860.

Rep. Steve King (R-IA) is the grandson of Freda Harm, who arrived in the U.S. from Germany at the age of four, brought by her family. King has notoriously said that you can't "restore civilization with someone else's babies," meaning white people should have more children because Hispanics are reproducing faster.

Mendelsohn said, "The good news is that while we’ve been hearing about the evils of immigration for centuries, the country appears to have continually weathered the storm. I suspect we’re going to be just fine moving forward."