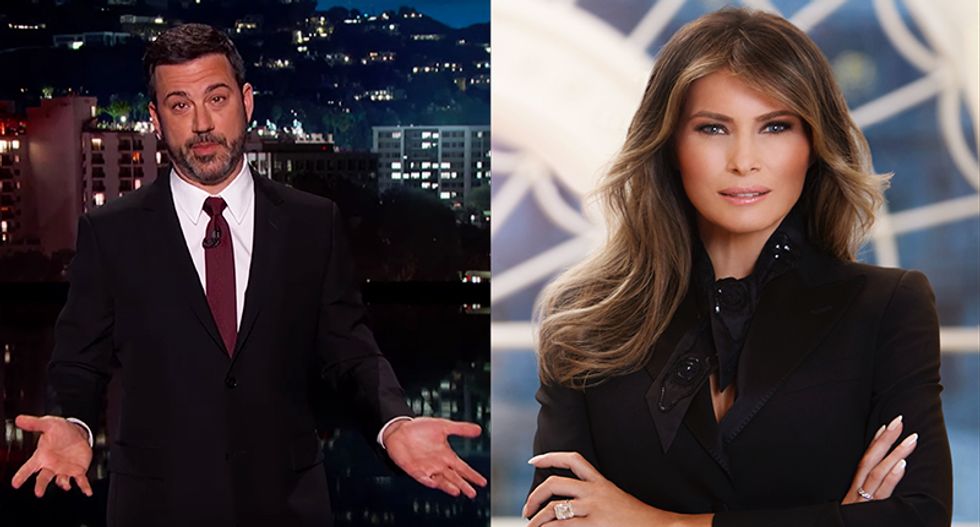 It could be a coincidence that Melania Trump canceled her trip to the World Economic Forum in Davos just after the news broke that her husband allegedly had an affair with an adult film star mere months after giving birth to their son Barron. But late-night comedian Jimmy Kimmel doesn't think so.

“According to her director of communications, the first lady is skipping her trip due to ‘scheduling and logistical issues,’” Kimmel said during Tuesday's show. “And because she hates him.”

“So, instead of going to Davos, I guess her plan was to stay back in the White House to keep digging the escape tunnel she has hidden behind a poster of Tom Selleck,” he joked.

He went on to mock the couple's lack of closeness and devotion.

“This will be a rare public separation for America’s most notoriously affectionate couple,” he said.

Neither the first lady nor President Donald Trump mentioned the couple's 13th wedding anniversary on Monday.

“I’m sure he just forgot,” Kimmel claimed. “I mean, how many anniversaries to how many wives can one man keep track of?”

Instead, Kimmel cut to a parody of the glorified dating gameshow "The Bachelor." This one, however, featured Melania Trump amid the female contestants seeking the affections of the top man.

Not surprisingly, Mrs. Trump didn't get the rose.