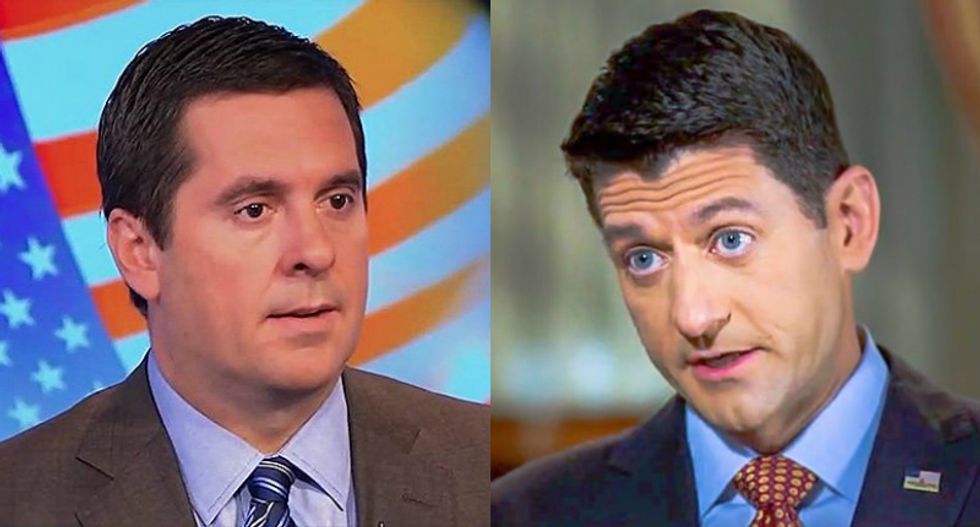 House Speaker Paul Ryan signaled that he would side with Rep. Devin Nunes (R-CA) in a dispute between Republican lawmakers and the Justice Department over classified documents related to the Russia probe.

Ryan indicated he would side with Nunes, who has threatened to hold top law enforcement officials in contempt of Congress if they did not comply with his subpoena demands, sources told CNN on Thursday.

The Justice Department has already allowed House Intelligence Committee members and staff to review some highly classified materials at a secure location, but Nunes wants to see more documents related to any payments the FBI might have made to corroborate the dossier.

Nunes had been investigated by the House Ethics Committee for allegedly releasing classified information related to the probe to the White House, but he was cleared last month and may return as head of the committee's Russia probe.

But the New York Times reported last weekend that campaign adviser George Papadopoulos, who has since pleaded guilty to lying to FBI agents and become a cooperating witness, revealed his Russian contacts in May 2016 while drinking with an Australian ambassador -- who later alerted U.S. law enforcement.

Ryan made clear to Rosenstein and Wray that he would support Nunes in the dispute, multiple sources told CNN.

"The Speaker always expects the administration to comply with the House's oversight requests," said Ryan's spokeswoman, AshLee Strong, but she would not provide additional details about the meeting.

The committee will also be allowed to interview FBI attorney Lisa Page, who exchanged politically charged texts with Strzok, and several other officials from the law enforcement bureau.

A second batch of Strzok's text messages will be provided to the committee next week.