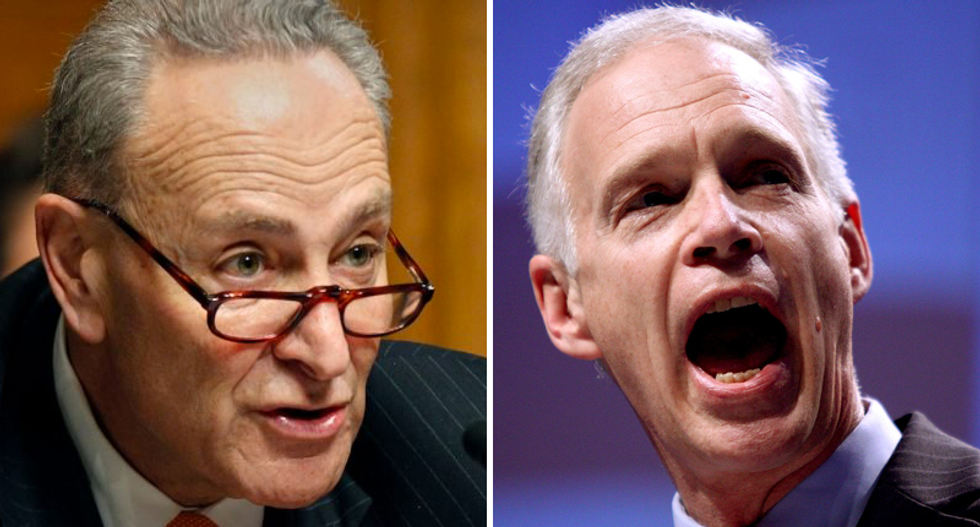 Johnson, the chairman of the Senate Homeland Security committee, on Tuesday told Fox News he has an “informant” that’s told him about a group [within the FBI] who are holding secret meetings off-site.”

“There is so much smoke here, so much suspicion,” Johnson declared, before adding he’s yet to “dig into” those allegations.

Johnson joined the ranks of other Congressional Republicans, including Reps. Trey Gowdy (R-SC) and Matt Gaetz (R-FL), who took to TV this week to tease the release of Rep. Devin Nunes’ (R-CA) anti-FBI memo. They also floated the existence of a “secret society” within the FBI, pointing to a single text between FBI officials Peter Strzok and Lisa Page widely believed to have been a joke.

Speaking on the Senate floor, Schumer blasted Republicans for engaging in efforts to “discredit” the FBI.

“Republicans and the right-wing media have been desperate to distract the nation from his investigation,” Schumer told his colleagues.

“It got so out of hand, I couldn’t believe this, that a Republican congressman suggested special counsel [Robert] Mueller’s investigation was a ‘coup’ on the floor of the House,” Schumer said, referring to a speech Gaetz gave in November 2017. “That congressman ought to go back and read his Constitution and read his history books. Rule of law is not a coup.”

“That political smear campaign has now bled into a spiraling and delusional attack on the FBI itself,” Schumer continued, noting the same people who wrote “a secret memo of partisan talking points, full of innuendo and glaring omissions, intended to suggest widespread corruption at the Dept. of Justice and the FBI” are the “same Republicans are now trying to release the slanderous memo … to the public.”

“On, and on, and on, conspiracy theories with virtually no fact,” Schumer said.

On FBI, Schumer says GOP is engaging in “conspiracy theories with virtually no fact. Paranoia, delusion. Why? Are… https://t.co/BJKiQhiqor
— Chad Pergram (@Chad Pergram) 1516899558.0

Schumer on GOP WI Sen Jounson’s accusation about the FBI: I saw..the senator who was propagating this this morning… https://t.co/BviOB2xMPg
— Chad Pergram (@Chad Pergram) 1516899651.0

After days of hyping the alleged “secret society,” Johnson on Thursday conceded it’s a “real possibility” those FBI officials’ remarks were made “in jest.”