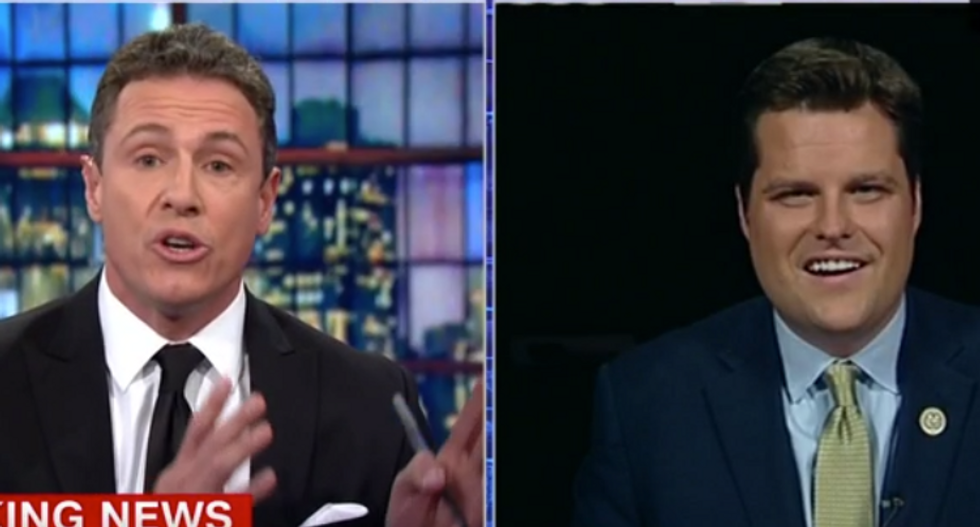 In an interview with Fox News, Gaetz declared the missing text messages between FBI agent Peter Strzok and Lisa Page “the biggest coincidence since the Immaculate Conception.”

“What are you talking about?” Cuomo asked Gaetz.

“Look, the notion, and again—this will be illuminated by the memo—but the notion that this five months, not any five months, this particular five months is where the black whole is?” Gaetz began. “That is one hell of a coincidence, because it’s precisely the time someone would be hatching a conspiracy, meeting with their 'secret society,' building out their 'insurance policy' to—“

“You don’t even know that one exists,” Cuomo said, referring to the alleged secret society. The CNN host then wondered, “what do you mean by the Immaculate Conception?”

“Look, I was making the point that this is an absurd coincidence,” Gaetz said, grinning.

“But like what, what do you think happened with the Immaculate Conception?” Cuomo asked.

“The Immaculate Conception, it’s obviously a religion document that deals with the Christian faith,” Gaetz stammered.

“I know, but where is the analogy?” Cuomo pressed. “That’s what I don’t understand. What do you think happened with the Immaculate Conception?”

“Did you really bring me on to discuss my religion?” Gaetz retorted. “The Immaculate Conception is not how Jesus is born.”

“It was Mary’s conception, it was the mother’s conception without original sin,” Cuomo shot back. “Facts matter, congressman. If you’re going to make an analogy at least know what you’re talking about. Because you’ve gotta have a basis for these things. You only know what you show. You gotta release that memo, it’s gotta have the facts and you better figure out what this ‘secret society’ is before you say it’s a shadow organization within the FBI.”