'Stalker!': Trump apologist whining about 'fake news' melts down when it's pointed out she pushed 'Pizzagate' conspiracy 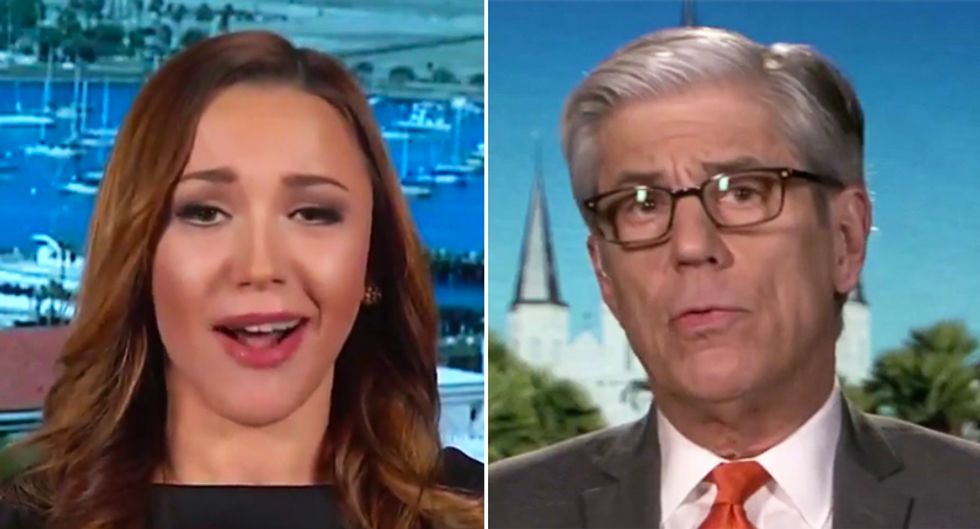 A conservative commentator became unglued on MSNBC Saturday afternoon after she leveled accusations of "fake news" at a confirmed report that President Donald Trump asked the White House attorney to fire Robert Mueller -- and then it was pointed out that she is a "Pizzagate" truther.

Her response was to call her fellow panelist a "stalker" for mentioning it.

"That's not what has been alleged, Stephanie," MSNBC host Alex Witt explained. "It's been alleged that he called for his firing, said 'I want him out,' and that Don McGahn said, 'No, basically you're going to have to go through me if you want to fire him, I will resign.'"

"Exactly," Hamill shot back. "It was alleged -- alleged. We don't know that for a fact."

"It's been independently confirmed. NBC News has confirmed it too," Witt reminded her. "How about Fox News, which I'm sure you watch from time to time? Fox News is saying Trump did have conversations about firing Mueller."

"Fox News can report what they want," Hamill blithely responded. "But we heard from the president, and he said he never had that conversation where he said he wanted to fire Mueller."

Asked to weigh in, Emerson set up Hamill by asking about her beliefs about being truthful.

"I assume Stephanie would like all of the facts, all of the truth, to be disclosed by whomever, whether it be Mueller, the Senate Intelligence Committee, or whomever," Emerson began before asking, "Do I have that correct, Stephanie?"

"Yes, absolutely. of course we want to have all the facts," Hamill responded. "I hope that you want the memo released too. It's Democrats that, again, are obstructing the release of this memo."

"There's no Democratic obstruction," Emerson shot back. "But we agree that we all want the facts. Then I have a problem with you suggesting that nothing is true, the New York Times has to constantly retract, none of that is true."

"Remember, in an interview you gave on camera several months ago -- actually a couple of years ago -- you pushed this idea of the 'Pizzagate,' that somehow Hillary Clinton was involved with pedophiles in a pizza store in Washington?" Emerson asked. "It was so severe that the host of that show asked you to retract it. So I have no confidence in your facts."

Accusing Emerson of "stalking" her, Hamill fired back saying, "Peter, I'm glad you stalked me and did some research. If you actually watch the videos you would see I was questioning some of the language that was used in the e-mails by John Podesta. I said nothing about the pizza shop, so don't start!"

At that point both Emerson and Hamill began shouting over each other as host Witt frantically waved her arms attempting to get them to stop.

"We're not going to have anybody stalking anybody else right now, let's get back on topic," Witt pleaded.

It should be noted that Hamill was recently put in "time-out" by MSNBC host Joy Reid for pushing other conspiracy theories, including the Clinton Foundation murdering Haitian politicians.