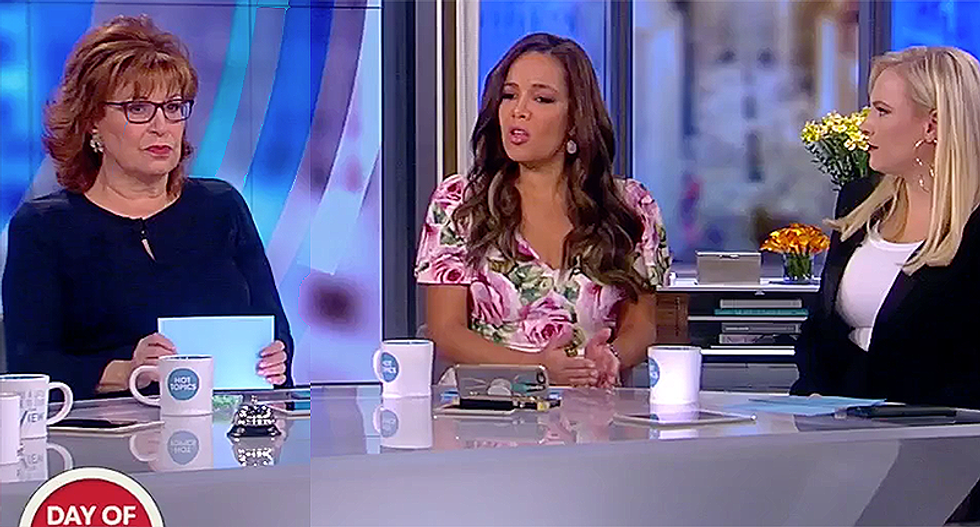 In a rare moment of agreement, the women of "The View" noted evangelicals in the United States seem to have lost their way in the continued support of President Donald Trump.

The women brought up evangelical leader Tony Perkins, who said this week that Trump gets a “mulligan” from evangelicals for his 70 years of indiscretions, because he's giving far-right Christians what they want politically. Despite running an organization called the Family Research Council, Perkins doesn't have a problem with Trump's many divorces and alleged affairs.

"The argument they give is that we supported, people like me, liberals, supported Bill Clinton, even though -- and Gloria Stein supported Bill Clinton even though affair and the Paula Jones and the Juanita Broaddrick et cetera, we're as culpable as the evangelicals in that sense," co-host Joy Behar said. "The difference, I think, is that the lefties, the liberals, do not set -- we don't set ourselves up as the moral arbiters of who you should be in life. We don't tell you if you can't get an abortion if you are on your death bed or whatever the problem is with you. We don't tell you who to worship or how to live. These people set themselves up as people who tell you how to live. So the hypocrisy is much deeper."

Co-host Meghan McCain read off the history of Perkins' attacks on LGBT people, marriage equality, LGBT soldiers and support of conversion therapy as well as other concerning issues. She warned that a new generation of Republicans will not stand for this much less the hypocrisy.

"I always worry about what's up and coming for my party in my generation," McCain said. "Younger Republicans aren't going to stand for this kind of crap. They just aren't. So, I think the last siren-song of his power is still with President Trump at this moment because he's appeasing his base in a lot of different ways, especially with speaking out at the Right to Life march, but I just don't see these people being as relevant in the election cycle."

Sunny Hostin, who described herself as a person of faith, noted that she was offended by evangelical leaders who refuse to stand for Christian values so they can get policies.

Goldberg cited the Bible noting that Jesus Christ has long been in opposition to these evangelical leaders.

"I don't mind anybody's religious thing but when you say that you're representing faith -- that's not faith," she said. "When you go against what Jesus said, Jesus said you don't judge people. 'Judge not, let thee be judged.'"

"Evangelicals always say 'What would Jesus do?' I don't think Jesus would do the things Donald Trump is doing," Hostin closed before the commercial break.