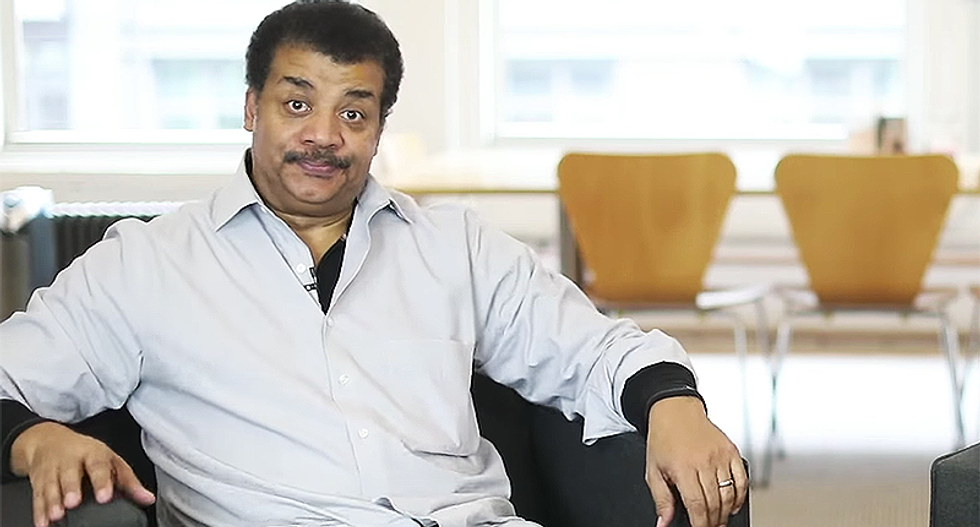 Neil deGrasse Tyson is blaming "flat earthers" for a downfall in education.

In his recent "Star Talk" video, the astrophysicist explained he's had to live through scientific opinions of rapper B.o.B and NBA star Kyrie Irving, both of whom think the Earth is flat. Never mind the thousands of photos that exist of a spherical planet or the thousands of scientists that have studied the earth for over 2500 years. They know better.

So, he sat out on a crusade to explain the obvious -- the Earth isn't a giant blue pancake floating randomly like a lost game of Frisbee golf in the universe.

But when it came to explaining to the doubters why this is obvious, Tyson seemed a bit miffed.

"We have videos from space of the rotating spherical Earth," he told Chuck Nice in the video. What's interesting, according to Tyson, is that people who believe the Earth is flat, believe other planets and the moon are round.

Trying to make it simple so "flat earthers" can understand, Tyson walked through the shadows cast on the earth during a lunar eclipse. They're never straight, they're curved. An even more simple explanation is that if Nice kept walking all the way around the Earth, he'd end up where he began, but from the west.

Yet, no matter how simply Tyson attempted to explain the proof, there will always be some that call it an unproved "theory."

"For me, the fact that there's a rise of flat earthers is evidence of two things," an exasperated Tyson continued. "One, we live in a country that protects free speech."

His second point, however, was far more bleak: "We live in a country with a failed educational system," he said. "Our system needs to train you not only what to know, but how to think about information, knowledge and evidence."

His comments come as the religious right is demanding so-called "Creationism" be taught in schools along with the scientific process of evolution. Though Creationists have mocked flat earthers in the past.

"If you don't have that kind of training, you'd run around and believe -- anything," he closed, vexed by ignorance.