WATCH: Parkland students react in the best possible way to news the NRA is sending Ted Nugent after them 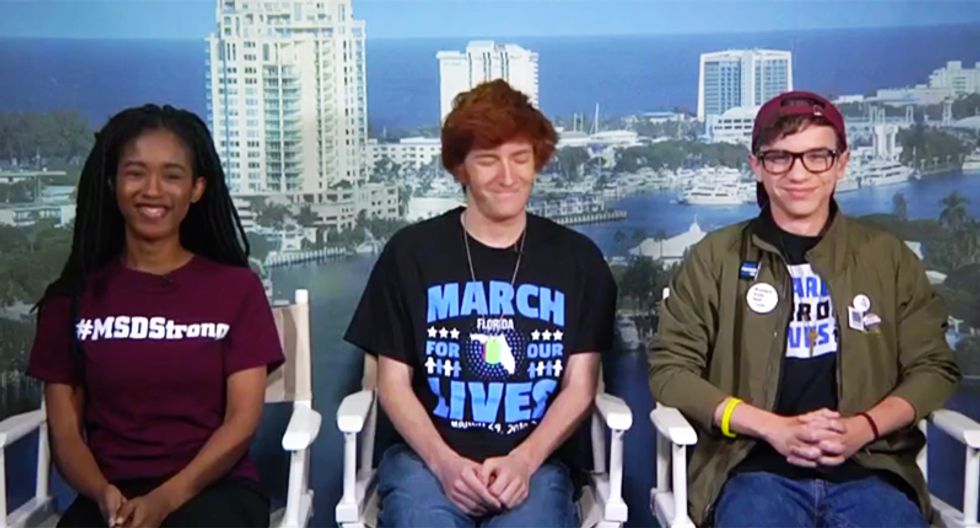 A panel made up of three student survivors from Marjory Stoneman Douglas High School reacted appropriately when AM Joy host Joy Reid informed them that the NRA was unleashing aging rocker Ted Nugent on them after the failures of attacks from NRA spokesperson Dana Loesch and Fox News host Laura Ingraham.

Appearing on a Newsmax show, Nugent  -- who often takes the lead in making outrageous statements in defense of the NRA -- called the Parkland teens "mush-brained."

They are “poor mushy brained children who have been fed lies,” Nugent asserted, adding the teens are “committing spiritual suicide” by pushing for  gun control. Nugent then labeled prominent Parkland teen David Hogg as having "no soul."

It began with a discussion on Laura Ingraham's ham-handed attack on Hogg and subsequent backtracking after advertisers fled her show.

Discussing the  surprise "vacation" Ingraham announced on Friday night that had Twitter users jeering, Reid asked, "There's some on the right criticizing your movement. The 'never again' movement for using boycotts as a tactic in this wrestling match over gun reform. Do you think it's unfair for David to have gone in that direction with Laura Ingraham?"

"David has a right to do what anybody else does," Parkland teen Ryan Deitsch replied. "Laura Ingraham attacked high school shooting survivor and that's wrong. All the movement, everybody who supports us are try to do is create a morally just society. That's what we were taught and that's what we were preached at and all we're trying to do is practice what we preach."

After student's Kyrah Simon and Chris Grady explained where they hope to take their movement, host Reid brought up Nugent.

"Well, the NRA has the likes of Ted Nugent on the side for gun reform insanity -- and you guys are brilliant," Reid complimented the three, who smirked and laughed in response.