‘Is he losing it?’ Morning Joe panel shreds Trump for lying about Amazon -- and GOP for letting him 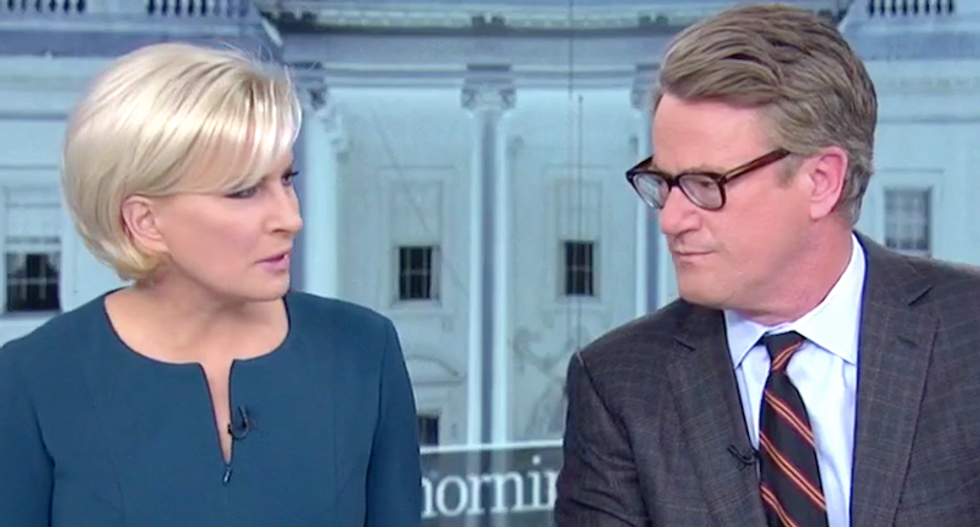 MSNBC's Mika Brzezinski wondered if President Donald Trump's attacks on Amazon and NATO allies were symptoms of a mental disorder -- and her guests urged Republicans to put a check on his behavior.

The hosts of "Morning Joe" agreed that Trump was lying about Amazon's business arrangement with the U.S. Postal Service, and they puzzled over the president's motivations for driving down the company's stock price through sustained Twitter attacks.

"I'm left with this question that some are asking," Brzezinski said. "Is he losing it?"

Washington Post columnist Eugene Robinson said the president's behavior was worrisome, regardless of his motivations.

"We seem to be at the intersection of venality and senility, and you know, if it was a Venn diagram, this would be the section where those two circles overlap," Robinson said. "Because a lot of what he is saying these days, you know, leaving aside for a second the fact that it's personally motivated lies concocted to damage somebody who he thinks is an enemy, but it also makes no sense. It simply makes no sense, and it has to assume that people have no idea how NATO works or have no idea how business works."

"Is the president ignorant, or is he out and out lying again -- telling a lie," said co-host Joe Scarborough. "One of the things that bug me about Bill Clinton so much was he'd get on TV and he would lie. He knew he was lying, we knew he was lying, everybody in the administration knew he was lying. Donald Trump does that every single day."

"One of the things that you've heard about President Trump is that even if his advisors correct him on a given point, that he doesn't necessarily have any interest in learning what the truth is," Jordan said.

"He believes that on merit of knowing it that that it possesses some kind of truth," she added. "With this specific case of Amazon, I really wonder when we're finally going to hear from Republicans. If we don't hear from them on this, then where are we going to? Is capitalism and protecting the free market not a holy grail of what the Republican Party once stood for?"