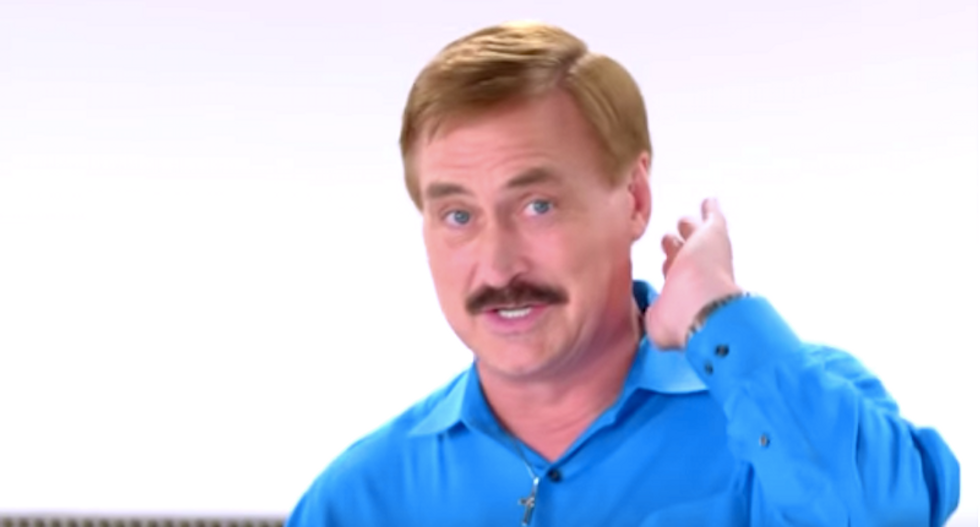 Pillow entrepreneur Mike Lindell is cozying up to President Donald Trump and his media allies in an apparent effort to save his failing company.

The TV pitchman and founder of the Minnesota-based MyPillow joined the president Saturday for dinner at Mar-A-Lago, where the two men praised one another, and Lindell tweeted out a defense of Fox News host Laura Ingraham as she faces backlash for her feud with a teenage gun violence survivor, reported the Star Tribune.

The Better Business Bureau of Minnesota and North Dakota revoked MyPillow's accreditation in December 2016 and slapped the company with an "F" rating over a series of customer complaints about the company's products, advertising and warranties.

MyPillow also paid around $1 million in civil penalties in California after the district attorney of Alameda County accused the company of making false claims about the pillow's ability to treat insomnia, sleep apnea and fibromyalgia.

Lindell became an outspoken Trump supporter during the 2016 campaign, and he continues to seek favor from the reality TV star-turned-president at his Florida private club.

"The president shook my hand and told me, 'You are doing a great job, Michael,'" Lindell told the Star Tribune. "He also said he is sleeping great on his MyPillow. I told him, 'People come up to me all the time to tell me what a great job you are doing and that you are in their prayers.' It was an honor to be at Mar-a-Lago on Easter weekend."

Trump publicly praised Lindell and his company last year at a White House event for manufacturers, despite a string of lawsuit, layoffs and failing grades filed against MyPillow.

"Michael was a supporter of ours right from the beginning, which I really appreciate," Trump said in July. "It's good to see you here. It's fantastic, and I actually bought a couple of pillows, and they're very good."

Lindell announced this week on his Twitter account that he would not join other advertisers and pull his sponsorship of Ingraham's Fox News program after she personally attacked Parkland teen David Hogg for his gun safety activisim.

"I did not take my advertising down from @IngrahamAngle and @FoxNews, nor do I intend to," Lindell tweeted, and tagged fellow Mar-A-Lago guest Sean Hannity.

I did not take my advertising down from @IngrahamAngle and @FoxNews, nor do I intend to. @seanhannity
— Mike Lindell (@Mike Lindell) 1522690354.0

The pillow pitchman said he visited Mar-A-Lago with his girlfriend, and he praised the food as "awesome."