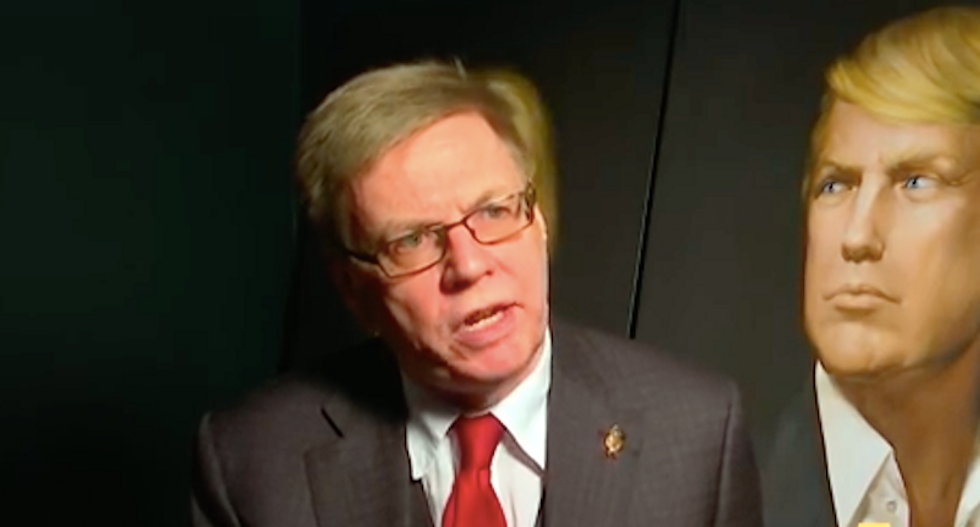 One of Fox News' former directors -- who claims an instrumental role in developing the network -- moved to Russia to help a sanctioned oligarch start up a right-wing TV network.

The religious network's founder, Konstantin Malofeev, is a Kremlin-connected oligarch who's been under U.S. sanctions since 2014 for financing pro-Russian separatist rebels in Crimea.

"Throughout the Ukraine crisis, Mr. Malofeev, [now 43], has emerged as a key figure linking the pro-Russia forces on the ground in Ukraine and the political establishment in Moscow," reported the Financial Times.

Despite the sanctions, former director Hanick -- who has since been accepted into the Russian Orthodox Church with his family -- to help launch the network.

"The nod to Fox is not accidental," Financial Times reported in 2015. "To get Tsargrad TV up and running, Malofeev hired Jack Hanick, one of Fox News’s founding producers, whom he met when they were both speakers at a Moscow conference on morality in the media."

The former Fox News founding employee was immediately impressed by the oligarch.

"'They put us all in the room and I thought, another speaker, great,'" Hanick told the newspaper. “'He seemed like a very humble guy. I had no idea he had a lot of power or political pull. I’m still not sure what he has.'”

Malofeev has leveraged his faith and conservative values to accumulate substantial personal wealth as founder of private equity firm Marshall Capital Partners, and he made much of that money as an investor in the Russian telecoms giant Rostelecom.

He paid back favors to the Kremlin by making Tsargrad TV an overt supporter of Russian president Vladimir Putin and his "nationalist" policies -- and Hanick played an instrumental role.

Hanick became an outspoken supporter of Putin, traveled to a 2013 event in Moscow with other American anti-LGBT activists to praise Russia's ban on gay "propaganda" -- which he later blamed for a breakdown in relations between the U.S. and the Kremlin.

"Russians understand that the U.S. has not fought a war on its soil since the civil war," Hanick warned in a 2015 column for the Observer. "If new hostilities start, Russia will not let the war be a proxy war where the U.S. supplies weapons and advisors and lets others do the 'boots on the ground' combat. Russia will take the war to the U.S."

Hanick left Tsargrad TV -- which has featured InfoWars conspiracy theorist Alex Jones and was the only Russian TV network to cover Trump adviser Carter Pages' 2016 speech in Moscow -- about three years ago but continued working as a consultant to the media company.

The former Fox News executive was invited to celebrate Trump's 2016 election in Moscow by Kremlin propagandist Konstantin Rykov -- who boasted on Facebook that he helped recruit the "Apprentice" star in 2012 to run for president as part of an "insane" plan to reshape the global order.

Hanick can be seen celebrating Trump's election in a video of the event, where he praises Russia for embracing the Christian values he says the U.S. has abandoned.