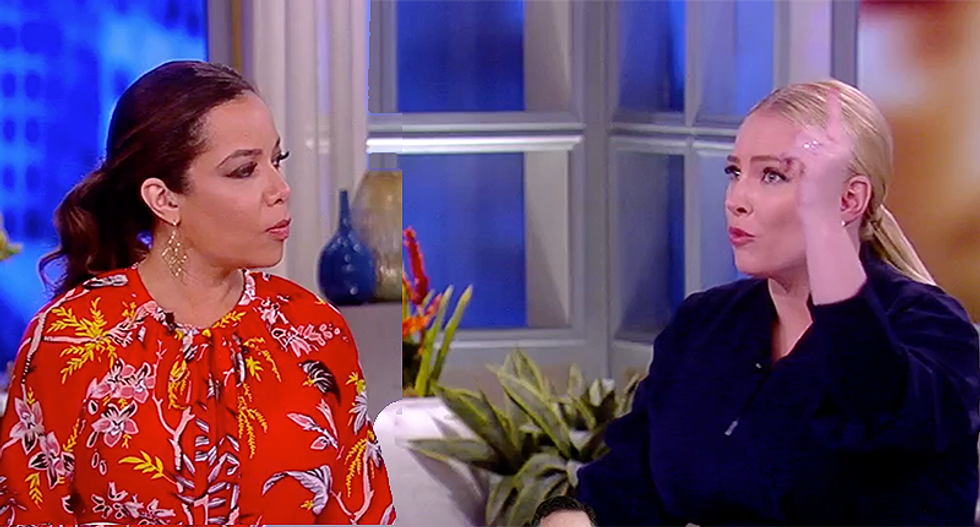 One GOP talking point trashing former FBI Director James Comey is in alleging that he is "a leaker" for releasing his notes and memos of his meetings with President Donald Trump.

Trump and the White House had begun an attack against Comey as part of their justification for firing him. Now that he's on a book tour, the attacks have been renewed.

"He delivered the information in much the same way that investigators deliver an investigation. I was in my office dozens, if not hundreds of times, where you have an FBI agent come and tell you these remarkable things in that sort of deadpan voice. 'Yes, he had little hands and yes his tie was too long,'" former federal prosecutor Sunny Hostin explained Monday on ABC's The View.

She went on to say that she certainly believes Comey more than she believes the president of the United States.

Conservative co-host Meghan McCain said that it seems Comey can't decide how he wants to categorize himself. Either he's claiming to be a Boy Scout defending the FBI, she said, or he's trying to be a pundit.

Hostin said that she found Comey's commentary to be credible, despite the president's best efforts to disparage him.

McCain recalled a Daily Beast article out Monday quoting existing FBI agents, who feel the comments from Comey are self serving or arrogant.

"He seems to love the media," McCain said, parroting a talking point repeated twice by Kellyanne Conway Monday. "Which is fine if you're doing what we do, but not when you're the head of the FBI."

"Well, he's no longer the head of the FBI," Hostin noted.

"There's also his leaking as well," McCain later said. "Because he leaked through his friend who is a Columbia professor. I'm sorry, but --"

"But he was no longer an FBI official," Hostin explained again.

"Leaking is a cardinal sin in all forms of politics," McCain said. "And it sure as hell is in the FBI -- in or. And I will say, if you have some information to say have the cojones to do it on TV. Let it come out of your own mouth, not some lawyer that is now apparently working for you but wasn't at the time. There are way too many conflicts like this, and if you are leaking anything, in or out out in any situation in politics, it is a cardinal, cardinal sin."

Hostin said that it is not a leak when you're no longer a government official to release your own personal notes. At the time, Comey was being attacked by the White House and the president and the notes were released to the special counsel and the House and Senate investigatory committees ahead of his testimony.

"I think that we have started using that term across the board," Hostin said. "A leak is when you're a government official--"

"But maybe the audience doesn't and maybe the viewers don't," Hostin said. "A leak, in my definition of it, is when you have a public official, a government official sending out confidential information. This alleged 'leak' was Comey giving a memo of his recollection when he was a private citizen to his friend and having his friend release that information. That is not a government leak."

However, when it came to Comey's comments about Trump's hands or complexion, co-host Joy Behar noted that it could have been an example of Comey explaining that he remembers details as an investigator.