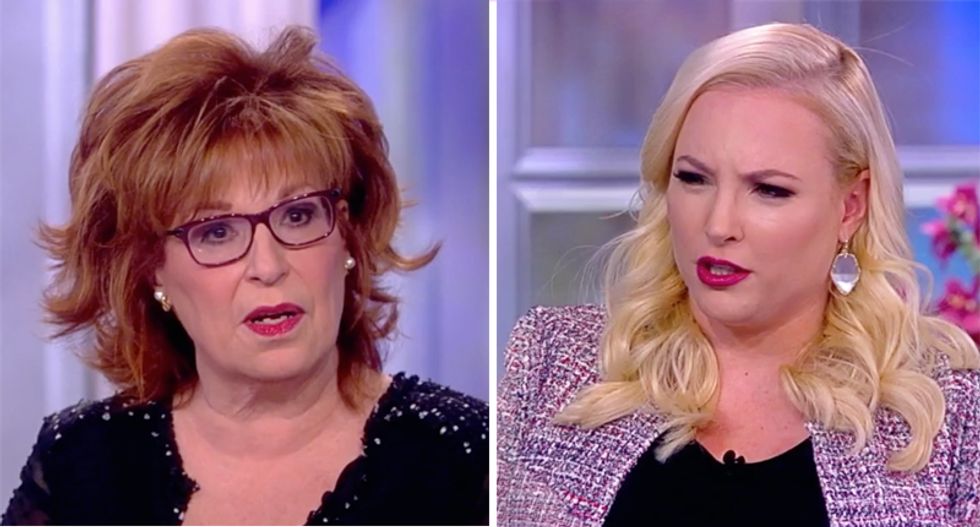 The conversation began with co-host Whoopi Goldberg playing the clip of Trump's complaint that the feds "broke into the office."

"Let's be clear, no one broke in, OK?" Goldberg ranted. "No one broke in. Let's -- regardless of where you stand politically, let us stick to that fact, no one broke into this office. No one broke in. They had a warrant. They went in, and several people including some of his appointees, had to sanction that warrant to go forward. Let's -- you know, no one is attacking our country. Our country is working well since people put aside what we always talk about as their bias and said, 'Yes, maybe we need to take a look at this.' So I want to be clear that nobody is -- nobody is sneaking. This is not Watergate."

Co-host Joy Behar explained that with Watergate, the burglars were there to steal something. In Cohen's case, the federal government was there to find something as part of an investigation.

She explained that it was a perfectly valid search warrant and to get one requires a lot of information and approval.

"It has to be signed by a judge and approved by a magistrate judge, and I have myself written up those affidavits for search warrants and I can tell you they are well thought out," she continued. "There are documents that support it, and I mean, I've issued some of them. They're like 40 pages long. So, the suggestion somehow that they shouldn't have been there doesn't hold water."

Co-host Sara Haines noted that Hostin explained to her an important point that directly refuted Trump's claims of a "witch hunt." Trump likes to pretend that the feds were looking for anything, even if it isn't Russia related.

"But you explained a prosecutor is obligated if they come across something that's illegal but doesn't fall under their" investigation. Mueller is also obligated as a prosecutor to pass along any evidence he finds of a crime to the proper authorities. In this case, he did exactly that, handing it over to U.S. Attorney Geoffrey Berman for the southern district of New York.

Behar explained that not only is Berman a Republican appointed by Trump, he donated $5,400 to the president's campaign.

"He can't say that this is a witch hunt from a supporter," she said. She also recalled the hubris for those who get caught in legal trouble. Specifically citing former President Richard Nixon, Behar noted that he tried to erase recordings of conversations that proved his guilt. She wondered what would be found being stored in Cohen's office.

"Maybe people tried to delete things and they're not deleted," Hostin said.

That's when McCain cut in with her own demand of the special prosecutor.

"Mueller, I implore him to wrap things up as soon as possible and tell us what he knows," McCain said. "I think it's completely dividing the American public. I understand that this raid, just the optics and the political capital that's being expunged is detrimental on many levels. Kellyanne Conway's husband is tweeting things, comparing it to Nixon again."

Behar quipped that she wondered if Conway was some kind of double agent.

As a fact check, Mueller and the FBI seem disinterested about the politics surrounding the investigation.