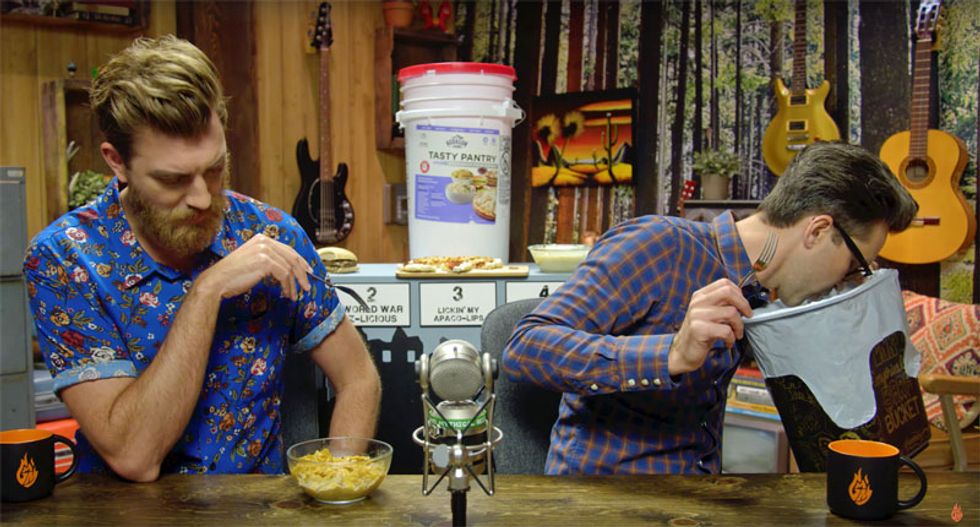 'Good Mythical Morning' host spitting out a dish that 'tastes like dog food' during a taste test of Jim Bakker's food buckets.

"Today, we taste the apocalypse," the review began. "When we heard televangelist Jim Bakker was selling doomsday food stored in buckets, we knew we had to get our hands on it."

"He went to prison for accounting fraud, but now he's back and selling giant buckets of non-perishable apocalypse food," they continued. "I just want to say, we do not endorse Jim or his food, but we sure do want to eat it and rank it."

In November, Bakker warned his audience of eternal damnation for their grandchildren if they didn't buy his bucket of pancake mix before a presidential assassination.

“You know, if they kill our president, or they destroy him or whatever,” Bakker worried. “If we elect the other side, I mean, they’ve come out against God.”

Bakker has also sold a $250 bucket of pizza.

The Good Mythical Morning review ranked the food relative to each other.

The worst category was "28 Diarrheas Later."

This is not the first time Bakker's "apocalypse chow" has been reviewed, NPR tasted one of his buckets of food in 2015.

"Religious rhetoric around 'the beginning of the end' is a common theme on The Jim Bakker Show," NPR reported. "In October, three hourlong segments were devoted to Bakker's assertion that we are the generation that will experience Rapture."