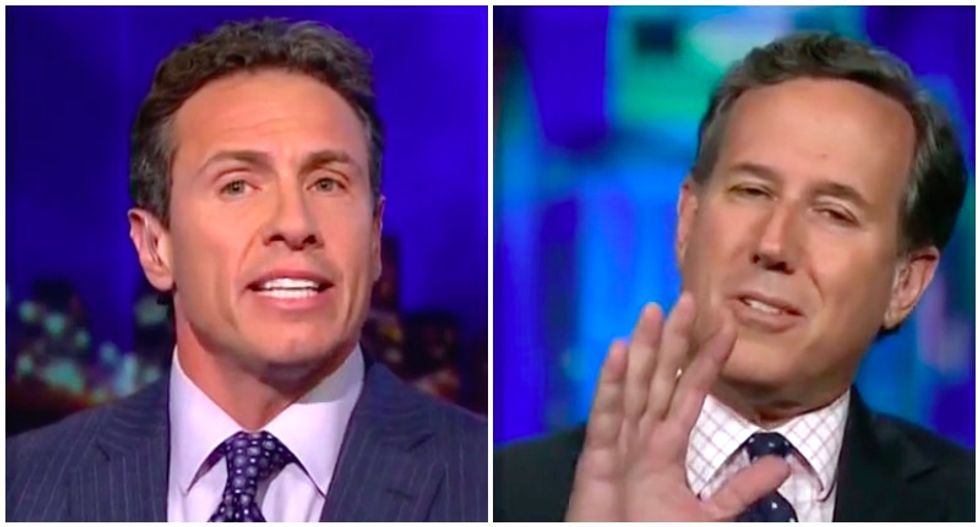 Former Sen. Rick Santorum (R-PA) went down in flames in an epic Wednesday morning interview with CNN's Chris Cuomo. The claims from the Pennsylvania conservative were so egregious that it even prompted Cuomo to groan and bring up the former senator's faith.

Santorum attempted to make the argument that there are far worse things that.

"I think that is one of the lesser situations here," Cuomo began. "There is bad decision making on display here and swampy by definition. If what the president's mandate was partially about was draining the swamp, getting rid of the people who will choose preference over power, why stand by this guy? The Morocco example alone. Somebody setting up a trip to Morocco and they get hired as a lobbyist."

Santorum argued that there is "a lot of smoke here" but refused to conceded that it meant there was a fire.

Cuomo brought up the recent moments of honesty from Republican officials, who confessed that the GOP's tax bill wasn't actually a benefit for everyday Americans. Similarly, Price admitted that destroying Obamacare's individual mandate essentially killed the stability of the healthcare market place, exactly as Democrats promised.

Santorum tried to bring up all of the big problems and high costs that happened with Obamacare, but Cuomo noted that many of the states refused to implement the law's requirements. In fact, 19 states fought the law in court, further delaying the law from taking effect. The result was higher costs passed onto Americans and it allowed the GOP to claim the law was too expensive.

"That is a political argument and a fair one to have," Cuomo noted. "But what we saw was public sentiment was increasing about the [Affordable Care Act] while you guys were trying to destroy it, because people were realizing what would happen to their prices. Now it is coming home to roost."

After a discussion about Sen. Marco Rubio's (R-FL) sudden honesty about the GOP tax bill, Cuomo noted everything comes down to the truth about a political dynamic.

"What do we see in this administration?" he asked. "And Rick, you can push back but it is just a fact. The Washington Post did an analysis of, let's put up some graphic to help with the numbers. In 466 days, this is like the lie-o-meter, the president has made a record number of false claims. You will say, 'Well, we have never measured it this way.' Chicken and egg, my brother. If you give me 3,001 misleading, outright lies and often ugly about things that our democracy is supposed to protect, you're going to get heat."

Santorum responded to the comment about Trump's lies but claiming that former President Barack Obama lied, too. It was an argument that prompted Cuomo to note his 8-year-old son knew better than to try. Santorum claimed that Obama's lies were worse than Trump's because, despite being considerably fewer, they were more substantive.

Santorum tried to explain that he's been willing to criticize Tump in the past but Cuomo wasn't letting him get away with it.

"You immediately talked about Barack Hussein Obama when I asked about Trump's lying," Cuomo countered. "What does that tell you?"

"Nobody held President Obama accountable for those lies," Santorum persisted.

Cuomo called folly, noting that over and over Republicans not only campaigned on the mistaken claim "if you like your doctor you can keep it." Indeed, Santorum himself spent time on CNN calling out mistakes and discrepancies.

"Oh come on, you've got to be better than this," Cuomo said. He went on to described it as being like a child called out for lying, who answers that their parent lied to them too.

"We don't say that to our children, Rick," Cuomo noted. "Why justify it with the president of the United States? Why give him cover?"