‘He was drinking too much’: Morning Joe reveals why Trump didn’t want Rudy Giuliani to join his administration 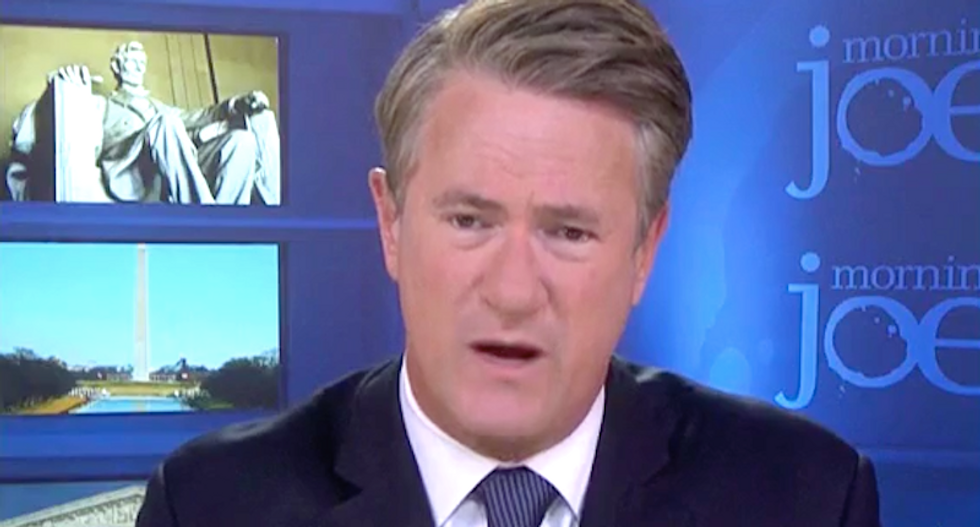 MSNBC's Joe Scarborough has been dropping hints why Rudy Giuliani was passed over for a role in the Trump administration, but he finally revealed the president's concerns.

The "Morning Joe" host has been saying that President Donald Trump privately expressed concerns that Giuliani had "lost it," and fell asleep in meetings, but he told viewers the real reason Tuesday with co-host Mika Brzezinski's prodding.

"He was drinking too much," Scarborough said.

The president apparently overcame his initial concerns about the former New York City mayor and asked him to join his legal team against the special probe, but Trump is reportedly already tired of Giuliani's antics on TV.

"The more this continues, the presidency as theater, you have to ask the question -- are we being played by Donald Trump and Rudy Giuliani?" Barnicle said. "Because every day Giuliani says something that is so odd and so at odds with we know it, that you wonder, are they just continuing this thing to keep us preoccupied with things that are going on in public, Giuliani talking about Donald Trump."

Scarborough dismissed that possibility, and then dropped his bombshell.

"Mike, I wish they were that smart -- they're not that smart," Scarborough said. "Donald Trump said during the transition that Rudy Giuliani was losing it, that he was a couple of steps behind."

Brzezinski reminded her co-host and fiancé that Trump's associates had raised other concerns during private conversations during the transition period.

"That he was falling asleep five minutes into meetings," Scarborough added. "I can mention this: Everybody around Donald Trump said he was drinking too much -- Donald Trump suggested as much -- that was two years ago. And the fact that Donald Trump brought this guy in two years later despite his own reservations about him, almost two years ago, that's not any, it's not 3-D chess. That's not even checkers, that's a monkey throwing poo against the wall, and it doesn't usually turn out well."

'Much-diminished' Sarah Palin no longer stands out in the MAGA movement she helped create: journalist

Former President Donald Trump and the MAGA movement suffered a long list of disappointments in the 2022 midterms, including Democratic gubernatorial victories in Arizona, Pennsylvania, Michigan, Wisconsin and Maryland. Democrats prevailed in key U.S. Senate races in Nevada, New Hampshire, Arizona and Pennsylvania, where they flipped a Senate seat that has been mostly in GOP hands for decades: the one presently held by arch-conservative Sen. Pat Toomey and once held by the late Sen. Arlen Specter.

Many of the Republican governors who were reelected in the midterms were traditional conservatives rather than hyper-MAGA candidates, including Ohio’s Mike DeWine, Georgia’s Brian Kemp and New Hampshire’s Chris Sununu. And in Alaska, Republican Sen. Lisa Murkowski has, according to the Associated Press, prevailed over far-right Trump-backed MAGA candidate Kelly Tshibaka. Murkowski won by 7 percent, and if she serves another six-year term in its entirety, she will be in the U.S. Senate until at least January 2029.

Adidas said Thursday it was investigating claims against Kanye West after a report detailed alleged inappropriate behavior, just weeks after the German sportswear giant ended its partnership with the rapper.

Trump poised for a 'miserable Thanksgiving' as legal headaches pile up: reporter

Specifically, Palmer points to several problems piling up for the former president, including his hand-picked candidates getting stomped in this month's midterm elections and his well documented legal troubles.