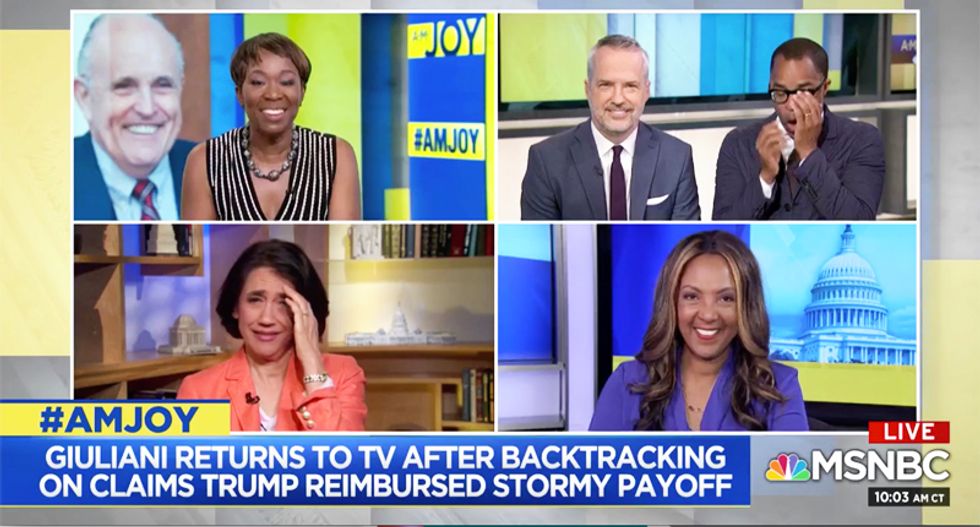 Watching clips from an ABC interview with President Trump's latest legal advisor, Rudy Giuliani, the panel on MSNBC's AM Joy were positively agog that the former New York City mayor performed even more poorly than he did on previous interviews this past week -- of which there are many.

After sharing a few choice moments of Giuliani's disastrous interview with ABC's George Stephanopoulos -- which Stormy Daniels' attorney Michael Avenatti called "an unmitigated disaster" -- journalist Eric Boehlert was the first to dig in as the entire panel around him burst into laughter.

"He's had quite a week, right?" the smirking Boehlert offered. " I mean, you know, Rudy Giuliani is an attorney in the way Michael Cohen is an attorney. So Trump clearly hired his mini-me, right?"

"Rudy has become this buffoon and he's a liar," he continued. "The idea he's filing legal briefs in D.C. is a joke -- he hasn't been in a courtroom in 30 years. He's basically like the communications director for impeachment and he's just kind of out there running interference."

Conservative writer Jennifer Rubin was beside herself with laughter as she sarcastically ticked off what Giuliani appears to be trying to do.

"There's one of several explanations," she began. "One, he's a plant from Mueller. Two, he's in declining mental state. Three, he wants to get fired. Four, he wants Trump to get fired. Or five, some combination thereof ... He also said, by the way he is just learning the facts. If you are just learning the facts, what are you doing on national TV?"

"He has no idea what campaign finance law is like," she continued. "He has no idea what the Constitution requires in this case. He is now saying things like the president doesn't have to respond to a subpoena -- which clearly he does. He is really off the wall."

"Jennifer just said this is a choice between amusing and horrifying," columnist Jonathan Capehart interjected. "And I would like to say it is horrifyingly amusing. The reason why Giuliani is on television now is because the field has been left wide open for Stormy Daniels and, by extension, Michael Avenatti."

"Michael Avenatti, her attorney, has been all over television, defending his client, supporting his client," Capehart explained. "He's been at every show, every network, you know, just pounding away at the fact that she has a story to tell and the president is a liar. He makes like outlandish predictions on these shows and then, lo and behold, days later something happens that proves him right."