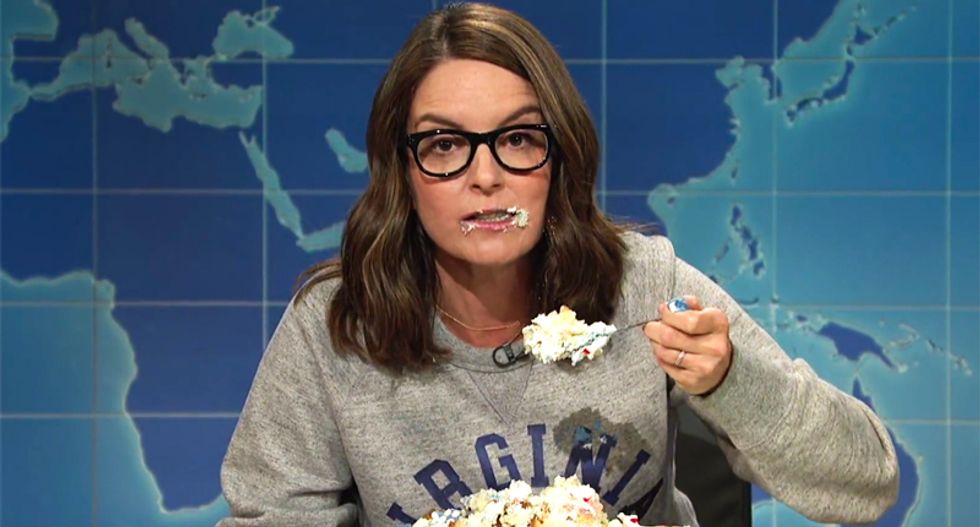 In an interview with Netflix host David Letterman, writer and comedian Tina Fey admitted that she has a few regrets about a comedic rant she unleashed on Saturday Night Live following the march on Charlottesville, Virginia by alt-right racists last August, reports Entertainment Weekly.

The video, which has been viewed over 8 million times on YouTube -- to say nothing of views on SNL's website, featured Fey wearing at University of Virginia (her alma mater) sweatshirt and pounding down a sheetcake while addressing the rally that occurred in the college town.

“It broke my heart to see these evil forces descend on Charlottesville,” Fey said, before mentioning President Donald Trump. “He condemns violence on many sides and I’m feeling sick ’cause I’ve seen Raiders of the Last Ark and wasn’t confused by it. Nazis are always bad. I don’t care what you say.”

She then added, "Part of me hopes these neo-Nazis do it in New York City. I hope they do try it and get the ham salad kicked out of them by a bunch of drag queens."

As part of her rant, she concluded that people should eat their feelings about the neo-Nazis -- in the form of "sheet-caking" -- which drew the ire of some critics who felt she took the wrong tack by saying the public should ignore the hatemongers.

Speaking with Letterman, she says she is now kicking herself over how she concluded the segment.

“I’m on a plane, trying to write the thing … trying to provide some relief,” Fey told the host. "You try your best, you try to have your eyes open, try to be so mindful, but it’s also a fast-moving train. I felt like a gymnast who did like a very solid routine and broke her ankle on the landing. Because it’s literally within the last 2-3 sentences of the piece that I chumped it."

"And I screwed up and the implication was that I was telling people to give up and not be active and to not fight," she admitted. "That was not my intention, obviously. I didn’t want anybody to get hurt. If I had a time machine, I could go back …I would end the piece by saying: ‘Fight them in every way except the way that they want.’"

"But I didn’t write that in time -- I wrote that two days later as I was pacing in my house," she confessed. "It’s painful. I wanted to help but I chumped it. But the culture of apology is not for me.”

You can watch the original video below: