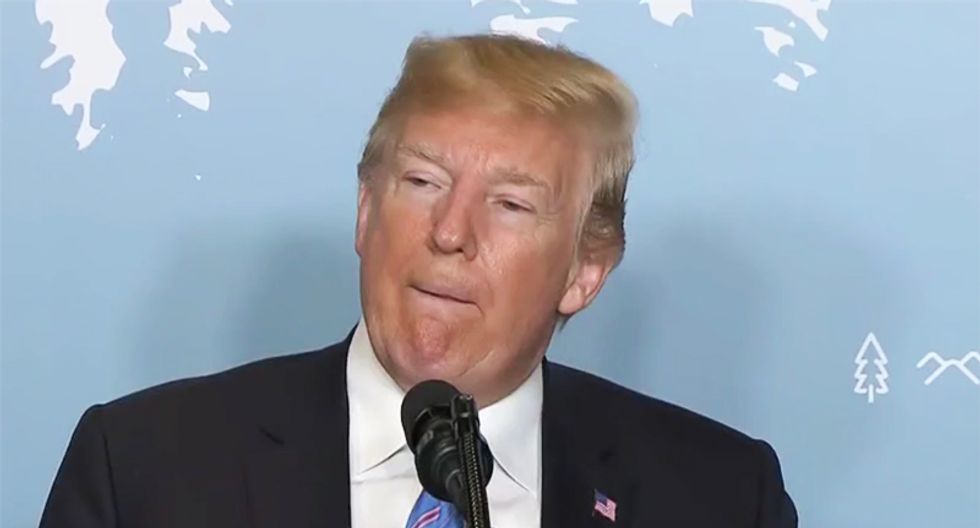 Appearing on MSNBC on Sunday morning, Rep. Ted Lieu (D-CA) smacked President Donald Trump across the snout for his meltdown following the G7 summit, which saw the president pitch a fit about Canadian Prime Minister Justin Trudeau -- before pulling out of a group statement that he had previously agreed to.

"The president accused Mr. Trudeau making false statements, reversed course on endorsing the G7 statement, and then threatened new tariffs on imported cars," host Witt relayed. "I want you to react to what Peter Navarro and Larry Kudlow said. First, Navarro, saying 'Justin Trudeau has a special place in hell reserved for him for attempting to diplomatically hoodwink this President, Donald J. Trump.' I have rarely heard such harsh back and forth between senior advisers, representatives of administrations, to another country's leader."

"It does not help the American worker when the president throws a temper tantrum at one of our closest allies," Lieu replied. "It's particularly odd to go after Canada for three reasons. Number one, the U.S. has an $8.4 billion trade surplus with Canada. Number two: Canada has lower average tariffs than the United States. And number three, American steel companies and steelworkers oppose these tariffs on Canadian steel, so the very industry that the Trump administration is trying to help opposes these tariffs. None of this makes any sense."

"Is there any part of this that is justifiable?" Witt pressed. "The president himself keeps reiterating it's about farmers -- specifically dairy farmers. Is that at least where there is legitimate concern for trade imbalance between the two countries?"

"That's actually not the reason that the United States, according to the Trump administration, imposed the steel tariffs on Canada," he replied. "And if I were a steelworker, I'd be quite offended that Donald Trump is trying to use the steel industry and steelworkers to somehow affect dairy. That's not how this should be done. At the end of the day, a trade war doesn't help anyone and it's going to ultimately hurt middle-class families across America."