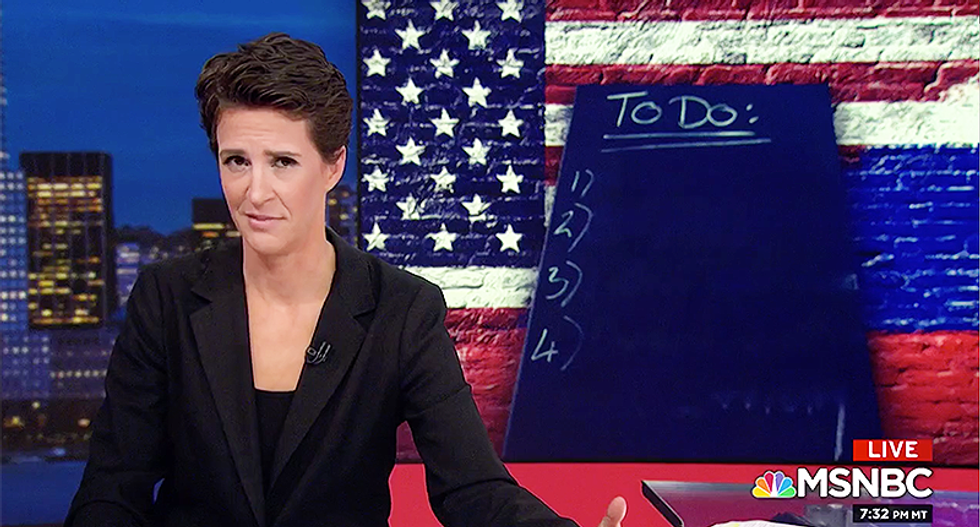 MSNBC host Rachel Maddow listed out a series of dramatic policy shifts the United States has seen that deals specifically with Russia that Congress could be holding hearings on. Instead, Congress is sending out tweets and racing to or from reporters instead.

"If they wanted to find a way out of the crisis we find ourselves in, there is a whole bunch of super practical, super specific things Congress can know can do," Maddow said Tuesday.

First, she suggested that if Congress doesn't want to look into the details surrounding Russian hacking of the 2016 election, perhaps it could hold a hearing about Russians were able to hack into U.S. infrastructure. Such infrastructure isn't isolated to the American power grid. There were Russian cyber-attacks in the energy sector, commercial facilities and the nuclear sector.

President Donald Trump told Tucker Carlson, in an interview that aired Tuesday, that he wants to focus on the two nuclear powers not being at war with each other. However, Russia hacking the nuclear sector could spell a nuclear disaster with one key stroke.

Another idea she had was that last month in Singapore, Trump announced that they were not going to hold military exercises with South Korea anymore. The decision came without the president consulting anyone or even informing anyone. Gen. H.R. McMaster found out about it on television. The idea came from a request made by Putin to Trump last year.

"How about Congress hold hearings on that massive national policy change? And how that policy change came about? Who was consulted on it? How was the president advised? Where did that idea come from?" she asked.

Another idea Maddow had for a Congressional hearing was the decision that Trump made that the G-7 should become the G-8 again and Russia should be invited back to the table.

"That would suit Russia very well but there is no indication that they were consulted about it or even had notice from the president that he was about to make that radical u-turn in U.S. policy and announce it publicly," she recalled. "That's a radical change of an important U.S. policy. How about holding congressional hearings on where that policy change came from the how were national security officials in our government involved in that shock announcement?"

If Congress wanted, they could also hold hearings on why senior advisor Jared Kushner took a meeting with the head of a sanctioned Russian Bank, who also has an intelligence background.

"The White House and the bank have given conflicting answers why it happen so we don't know why," she noted. "That was a meeting with a sanctioned Russian entity and we don't know why. How about a hearing about that?"

This year the IRS under the Treasury Department decided that organizations like the National Riffle Association and other entities no longer have to report who their donors are. It's a convenient decision since it was learned that the NRA took millions from Russian-linked donors. Then a Russian woman was charged with being a conduit between the Russians and the NRA.

"Amid these red hot concerns, and what appears to be open federal investigations into whether the NRA might have not only been used as a conduit for Russian influence but potentially as a conduit for Russian money into the presidential election," Maddow said. "On that same day we learned that a Russian spy was being criminally accused of pulling it off."

Maddow wants to know why Congress isn't hauling in Treasury Department officials to testify on how that decision was made.

When the 12 Russian hacker indictments were handed down last week, it revealed that at least one member of the U.S. Congress also sought and received hacked information on their opponent from Russia in the 2016 elections. Maddow wondered why they're not holding hearings on it.

"The justice department is saying that hacked information, presumably from the Democratic Congressional Campaign Committee, was stolen by Russia, and then used in a congressional campaign," she said. "Reasonably speaking you might think that the Ethics Committee and the Congress could hold a hearing or two on whether any serving member of Congress solicited that stolen information from Russian military intelligence and there by knowingly benefited from that stolen information to secure their own election."

All of these potential hearings are possible, if only Congress had the will to investigate.