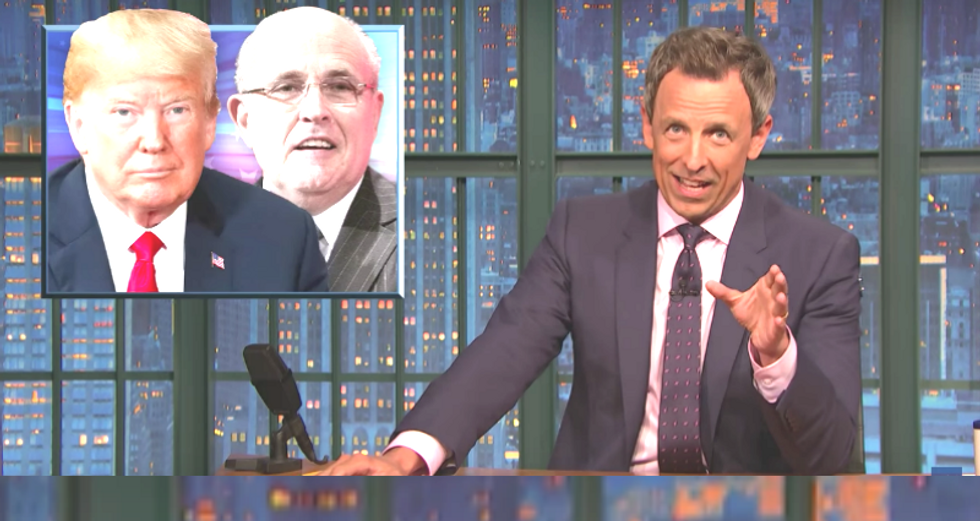 Secret recordings of President Donald Trump's former lawyer Michael Cohen were made public on Tuesday. The recording details a conversation between President Trump and Cohen about a payment for a Playboy Playmate's story.

President Trump's lawyer Rudy Giuliani went on Fox News to dispute the tapes. "He insisted that President Trump would have not wanted to use cash, but his evidence for that was not very strong," Meyers said.

"I ensure you we listened to the tape numerous, numerous times... The president is not an idiot" Giuliani said.

"That could have worked until you said 'the president is not an idiot,'" Meyers joked.

Giuliani then suggested everyone listen to the tapes at least three times.

"This is a criminal investigation, and they're treating it like it's Laurel verse Yanny," Meyers said.

When asked if there were more tapes Giuliani said, he wasn't sure and then said "don't quote me on that."

"Don't quote you on that?" Meyers said. "You're on TV. You're doing an interview. I'm shocked he didn't end the interview by saying 'this was really fun when does the TV interview start?'"