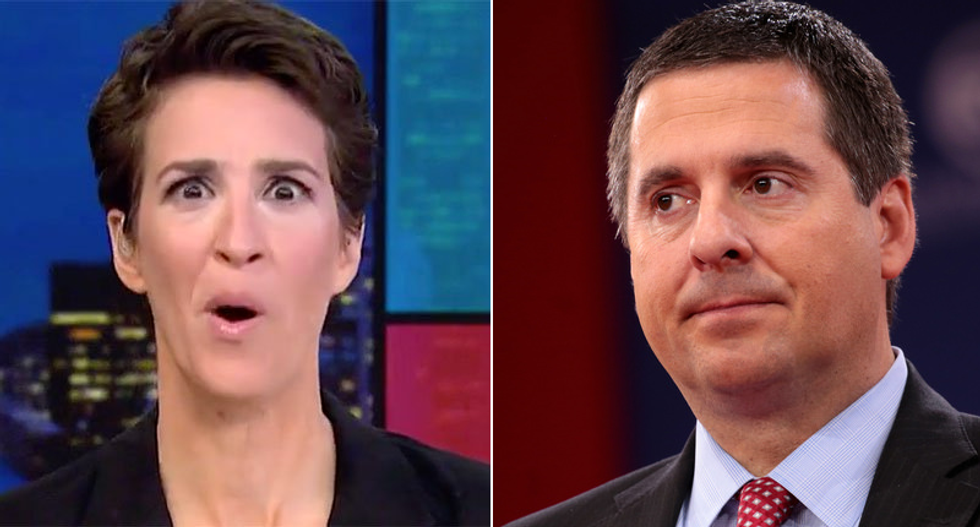 In the first clip, Nunes confesses that he's often embarrassed by Trump, particularly his tweets.

"Sometimes we cringe on the president's tweets," Nunes said at the event.

In the second clip, Nunes is heard saying that if there was someone that was an American citizen or a political campaign got secrets from a foreign government, "it would be a very bad thing." He described a scenario where Rodgers may have scored stolen emails that she chose to release.

"Well, if that's the case, then that's criminal," he said.

"With federal prosecutors now claiming in a federal indictment Wikileaks and D.C. Leaks and Guccifer 2.0 were the means by which stolen e-mails were disseminated during the presidential election and lots of still accruing evidence people associated with the Trump campaign and the president's family and the president himself helped in that dissemination during the campaign, it cannot help that the lead opponent of the Russia investigation privately concedes when he thinks nobody is recording him that sort of activity, if proven, that would definitely be criminal," Maddow explained.

This after Nunes has spent over a year being "acrobatic in his contortion in making the Russia scandal go away," Maddow said.

In response to a question from the audience about deputy attorney general Rod Rosenstein, Rodgers interjects and says that there is a plan in place from the Republicans to impeach Rosenstein.

"It's a bit complicated, right?" Nunes is heard saying. "I say that because you have to we only have so many months left, right. So if we actually vote to impeach, okay, what that does is that triggers the Senate then has to take it up. Well, and you have to decide what you want right now because the Senate only has so much time. Do you want it to drop everything and not confirm the Supreme Court justice, the new Supreme Court justice?"

He goes on to say Rosenstein deserves to be impeached.

"I don't think you will get any argument from most of our colleagues. The question is the timing of it right before the election," he continued.

Getting rid of Rosenstein is how Congressional Republicans can stop the Mueller investigation.

The final segment Maddow pulled from the tape was about how Nunes views his role in Congress and keeping the majority in Congress.

"So therein lies, so it's like your classic catch-22 situation, where we were at a -- this puts us in such a tough spot," Nunes says. "If [Jeff] Sessions won't unrecuse, Mueller won't clear the president, we're the only ones, which is really the danger. That's why I keep -- thank you for saying that, by the way -- we have to keep all these, we have to keep the majority. We do not keep the majority, all of this goes away."