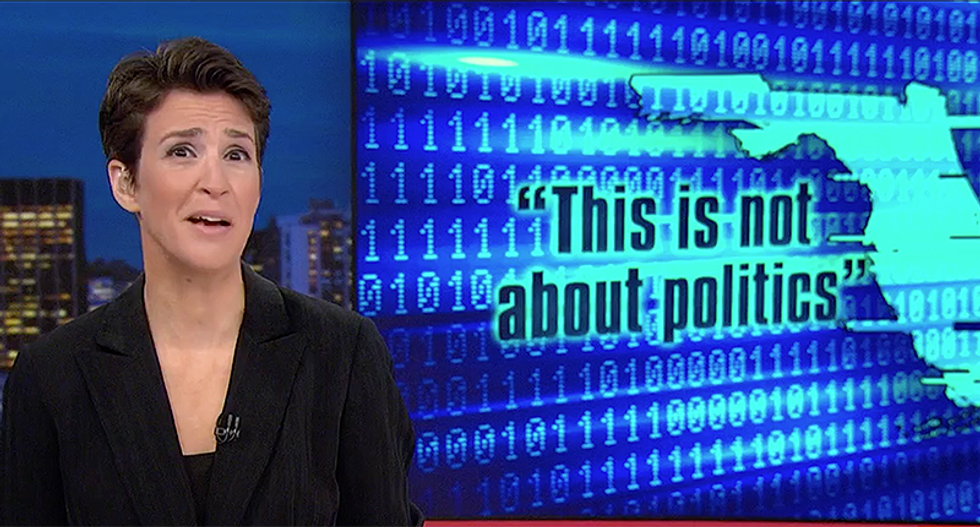 Sen. Bill Nelson (D-FL) sounded the alarm that the 2018 Florida elections were already in the process of being hacked. So, when counties reached out to the Department of Homeland Security and the FBI for help, all they got was: "we'll get back to you."

Early voting began this week in Florida, but according to Nelson, "the Russians have already penetrated certain counties in the state and now they have free reign to move about."

Gov. Rick Scott (R-FL) has criticized Nelson, saying that he's making things up and can't back up his claim.

When Rachel Maddow's team reached out, the FBI and DHS said that they would respond to the issue directly to the Secretary of State of Florida on the matter. The SOS did reach out to the agencies for help after Nelson made the claim.

"The agencies wouldn't tell us any more, but they did tell us, 'We'll get back to them,'" Maddow relayed. "Here's what I want to know, though. Doesn't that seem kind of important? I mean, do the individual counties here, even after this warning from their home state senator, do they have to figure out if Russian military intelligence operatives really are in their systems moving about with free rein?"

She explained that it was absurd to think that these counties could fight it on their own, or even afford to try and fight it.

"Or, if they get a call back from DHS maybe they get some help or advice? Doesn't this seem like a losing debate?" she said.

The news comes two years after the 2016 election, in which Russians were found to have hacked into several entities from power grids, to election results at the state level, as well as both party committees.

Maddow brought in former U.S. Attorney David Hickton, who brought the first ever charges against five Chinese hackers for espionage, to explain the dire nature of the security.

"I do feel like there is a mismatch between what we're told now, at several levels of government, is a Russian military intelligence operation ordered from the highest levels of that government," she said. "It is a state operation and how we are playing defense as a country. Is there more that than I am seeing?"

Hickton explained there is a greater need for leadership from the president as well as state officials. Florida isn't the only concern. He noted that the FBI had to alert the state of Maryland that they were using software from a company that was owned by a Russian oligarch.

Maddow noted that Nelson is upfront about the concern, but he's also saying that he can't tell anyone more or reveal how he knows the information. It has left counties in the awkward position to figure out how to defend what he's warned them.

Scott has put Nelson in a bind saying that either he's lying or he's revealing classified information. However, Hickton remarked that one could warn of a general hacking without disclosing anything that is classified. He explained that Nelson probably isn't allowed to say much more than he already has.

He noted that intelligence agencies could spell out the exact information the way that he did with the Chinese hackers and that special counsel Robert Mueller did with the indicted Russian hackers. The problem is that it might be too late.