Tom Arnold confronts Megyn Kelly: 'You defend Kavanaugh and those guys, maybe you defend me for one second' 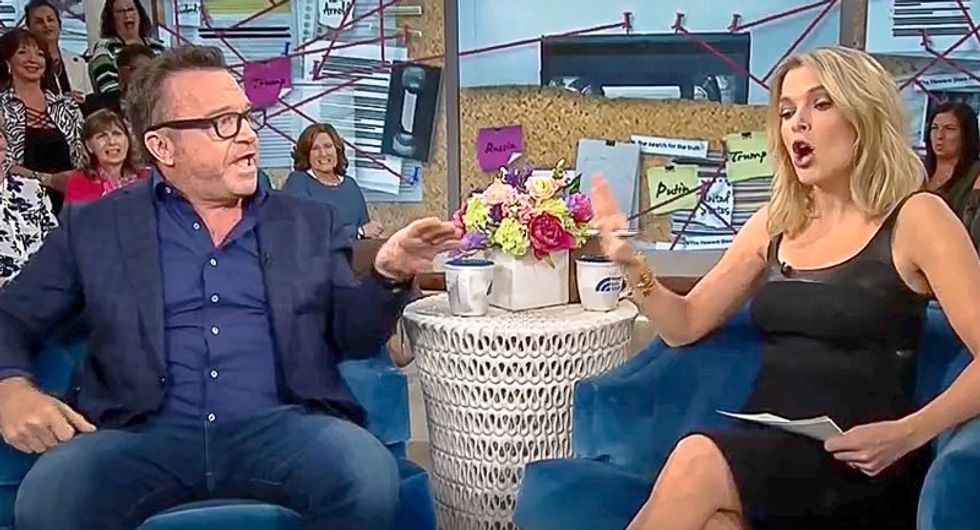 While speaking to Arnold on her Today Show program, Kelly noted that the actor had been accused of bruising actress Roma Downey's hand when he confronted her husband, producer Mark Burnett, who has refused to release tapes of President Donald Trump on The Apprentice.

"I didn't touch her, I didn't see her," Arnold insisted.

"It's all fun and games," Kelly said. "But let's be honest, if you did assault her as she claims, it's no laughing matter."

"If she said I assaulted her, it's no damn laughing matter," Arnold agreed. "Am I right? Because you keep defending Kavanaugh and those guys. Maybe you defend me for one second!"

"No, I won't," Kelly snapped. "And I am not defending Kavanaugh. I am asking for a fair hearing."

"No, no, no, no, no!" Kelly pushed back. "People are looking to condemn Kavanaugh without even hearing the evidence."

"No, no, no, no, no!" she added as Arnold tried to speak. "I will set the record straight. It's my show. What I want is a fair hearing for Kavanaugh and for his accusers."

On several prior shows, Kelly has made the case for Kavanaugh.

“Maybe he blew her off,” she said of Kavanaugh's accuser on one show. “This is what defenders would say, right? She been harboring — she had an axe to grind about him and she lays the foundation as a Democrat [sic] donor, saying I don’t want — I’m just going with the most dramatic theory.”

Kelly has repeatedly said that both Kavanaugh and his accusers should receive a "fair hearing" but she also knocked down the idea of a nonpartisan FBI investigation.

“[The FBI] is not a super-secret police force to investigate super-secret really bad things,” she said on Monday. “That’s why we have congressional investigators. The Republicans actually are investigating the Christine Blasey Ford allegations. And the Democrats have refused to do so!”