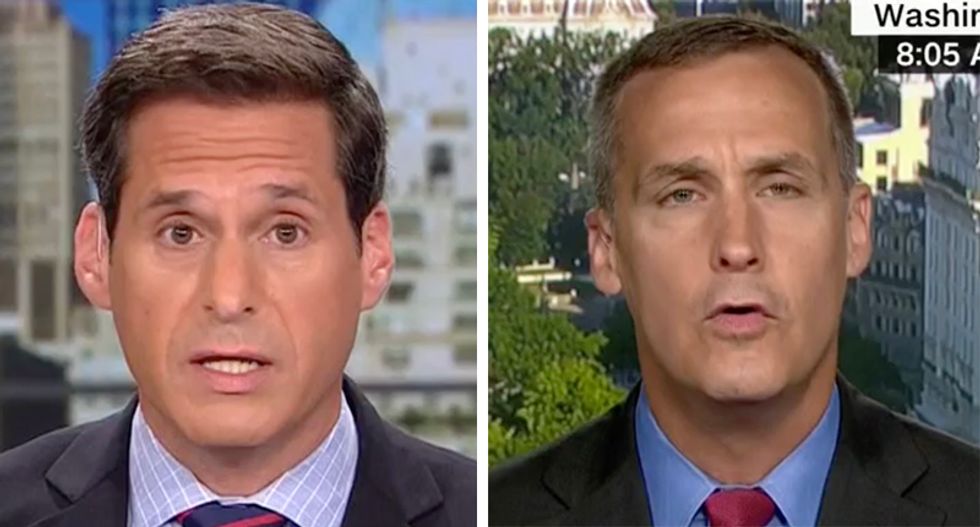 CNN invited former Trump for President campaign manager Corey Lewandowski on to talk about the anonymous author of a scathing New York Times op-ed that roiled the White House on Wednesday, only to have host John Berman have to stop and fact-check the Trump defender multiple times.

"First and foremost, people have an opportunity to serve this country in a number of different ways and being a government employee is one of those," Lewandowski insisted. "If you don't like your job and you're disgruntled, because of what this president has done, you can find another job but I think it's wrong and disingenuous to send something to the "New York Times without your name attached to make accusations that are unfounded and clearly can't be responded to."

Lewandowski then inferred that the writer is part of the "deep state" -- meaning career government employees -- after which Berman had to point out that writer appears to be a high-ranking Trump appointee.

"These are individuals who don't support the president's agenda, the agenda of lower taxes, less regulation. less government bureaucracy, an agenda he put forth to the American people during his campaign and two years later he is fulfilling," Lewandoski pressed on only to have Berman push back.

"I agree he [Trump] made clear what his agenda was when he ran for office and he's going down the list," Berman lectured. "To be clear in this op-ed, the writer claims when you talk about taxes when you talk about deregulation and the military that he or she agrees with the president on that matter. What he or she disagrees with is the president's amorality and the behavior inside the West Wing."

According to Lewandoski, he believes that the author is a holdover from the former Democratic administration which caused host Berman to laugh.

"It seems unlikely to me this person is a holdover when the person is praising the tax cuts -- praising deregulation, talking about the fact that they like many things that happened," Berman told the stonefaced Trump defender. "It doesn't sound like a Democrat. I don't know and neither do you, but it doesn't seem likely."