Why did Trump enlist Mike Pence and other cabinet members to convince a reporter that he wasn't firing John Kelly? 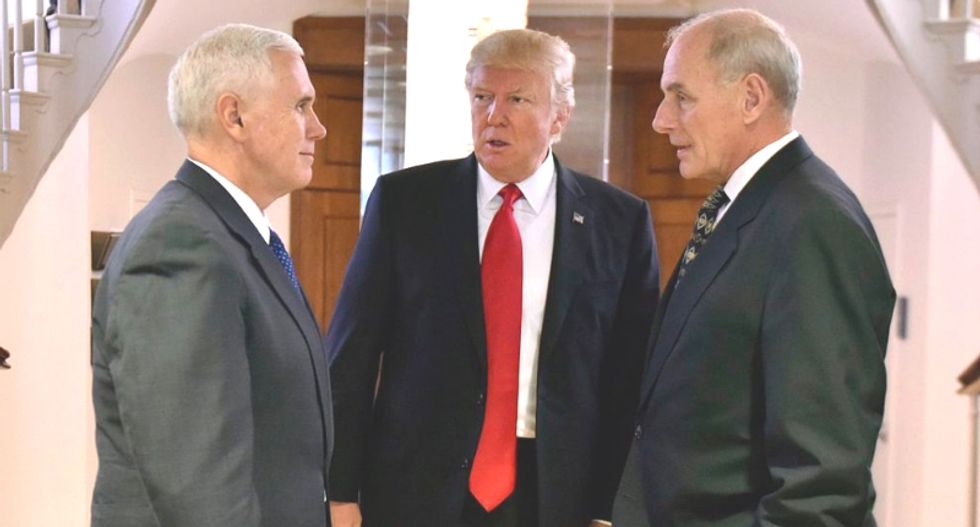 President Donald Trump for some reason decided to enlist the help of his vice president and other cabinet members to convince a New York Magazine reporter that White House chief of staff John Kelly was not leaving his job.

On Tuesday, the Daily Intelligencer's Olivia Nuzzi was at the White House trying to figure out how and why Kelly was still at the White House "in spite of convincing and persistent rumors and reports" about his mutual dissatisfaction with the president.

In her first-person account of the bizarre day, Nuzzi wrote that as she was leaving the White House, she got a call from a "serious"-sounding Sarah Huckabee Sanders who informed the reporter in a roundabout fashion that Trump wanted to speak to her.

"What ensued amounted to a private press conference — featuring a series of special guest stars from the highest echelon of the Trump administration — to try to get me to change my mind," the reporter wrote.

"General Kelly’s doing a very good job,” the president told the reporter. “We have a very good relationship. The White House is running very, very smoothly."

He went on to suggest to Nuzzi that United Nations ambassador Nikki Haley told him either six months or a year ago that she intended to leave the administration before her surprise announcement earlier in the week.

"We have a very smooth-running organization even though it’s never reported that way," Trump said. "So the real story is that. It’s really the real story. When you walk in here, you don’t see chaos. There is no chaos. The media likes to portray chaos. There’s no chaos."

The president again insisted that he's "very happy with General Kelly" and that he has "a very good relationship" with his chief of staff before ranting about his poll numbers and accomplishments to the reporter. She noted to him that other aides that Trump had praised had left the administration, leading to a conversation about Steve Bannon, who the president claimed to not have spoken to for a year but had seen on television.

Then, Nuzzi wrote, the president called in Kelly himself.

"General! Come here a moment!" the president said, cutting himself off about Bannon. "This is Olivia, she’s going to say very, very wonderful things about you."

He also invited in Secretary of State Mike Pompeo, who reportedly had a scheduled lunch with the president, and later exclaimed "look who you have here" as Vice President Mike Pence entered the Oval Office.

"This is Olivia," Trump said, introducing Nuzzi to the VP. "She’s a disruptive writer but that’s okay."

"This was beginning to feel ridiculous," the writer noted, "like this was the reunion episode of a sitcom, in which Bob Saget might come out next to an applause track."

Later, Pence's chief of staff Nick Ayers — a reported contender for Kelly's position — entered the room. Trump insisted to Nuzzi that he'd never offered Ayers the chief of staff's job in spite of reporting to the contrary.

At one point, Trump asked Kelly, "uh, General, what do you think of the president?"

"He’s a great president,” Kelly said. “Do we disagree sometimes? We do. My job is to make sure that that man has all of the information available from whatever source so that he makes the best decision, and then, when that decision is made, my job is to then implement that decision."

"There is, to the best of my knowledge, no chaos in this building," the chief of staff continued. "We’ve gotten rid of a few bad actors, but everyone works very, very well together."

After more comments from Kelly about the lack of chaos in the West Wing, Nuzzi and the rest of the surprise guests in the Oval Office exited — but when she turned around after someone called her name, she saw the chief of staff and his rumored replacement in an embrace.

"I turned toward the room again to see Kelly and Ayers entwined, their arms stretched around each other and their faces pressed close together," the reporter wrote. "They smiled theatrically. 'This is my friend,' Kelly said."

"'Yes, and he’s mine,' Ayers said," the article concluded.