Amazon’s move will gentrify neighborhoods – at what social cost?

When large companies move into an area, politicians often proclaim how the new business will create jobs, increase tax revenues, and thus lead to economic growth. This is one reason local governments offer tax incentives to businesses willing to move in.

Amazon’s decision to locate offices in Long Island City across the East River from Manhattan, and in Crystal City on the outskirts of Washington, D.C., follows this pattern. The New York location borders the largest low-income housing area in the United States, with mostly African-American and Hispanic residents whose median household income is well below the federal poverty level. These people, local politicians claim, will benefit from Amazon’s move to the neighborhood.

However, when large companies with an upscale and specialized workforce move into an area, the result is more often gentrification. As economic development takes place and prices of real estate go up, the poorer residents of the neighborhood are forced out and replaced by wealthier ones.

Is such a market-driven approach that accepts displacement ethically justifiable? And how do we even measure its costs?

Can gentrification ever be ethical?

Although politicians don’t typically frame gentrification as a question of ethics, in accepting the displacement of poor residents in favor of better-off residents they are, in effect, making an argument based on ideas of utilitarianism.

A classic example is of a new dam that will generate electricity, irrigate crops and provide a new lake for recreation. But it might also displace people and flood land that is used for other purposes.

Economists might calculate the dollar cost of the dam itself, the monetary value of the land lost, and the cost to relocate displaced people. They would weigh these monetary costs against the value of the electricity gained, the increased food production, and added income from recreation.

What economists miss in these calculations are the social costs. For example, they do not count the lives disrupted through displacement, nor do they determine if the benefits of the dam are equally available to all.

Gentrification, as an economic and social phenomenon, is not limited to cities in the United States. Gentrification has become a global issue. In cities as geographically dispersed as Amsterdam, Sydney, Berlin and Vancouver, gentrification has been linked to free-market economic policies. Put another way, when governments decide to let housing and property markets exist with little or no regulation, gentrification typically flourishes.

When neighborhoods gentrify, politicians and policymakers often point to physical and economic improvements and the better quality of life for residents in an area after gentrification. For example in 1985, during a period of intense urban renewal in New York City, the Real Estate Board of New York took out advertisements in The New York Times to claim that “neighborhoods and lives blossom” under gentrification.

Through the lens of utilitarianism, one could say that the population living in neighborhoods after gentrification experience greater happiness than before.

The fallacy of this argument is, of course, that these “happier” populations are overwhelmingly not the same people as were there before gentrification. As a scholar who works on questions of ethics in the built environment, I have studied how we, as the concerned public, can better equip ourselves to see through such arguments.

Economic development in an area leads to less poverty in that area, not because the personal economic situation of poor people who live there has improved, but because the poor people have quite simply been erased out of the picture. 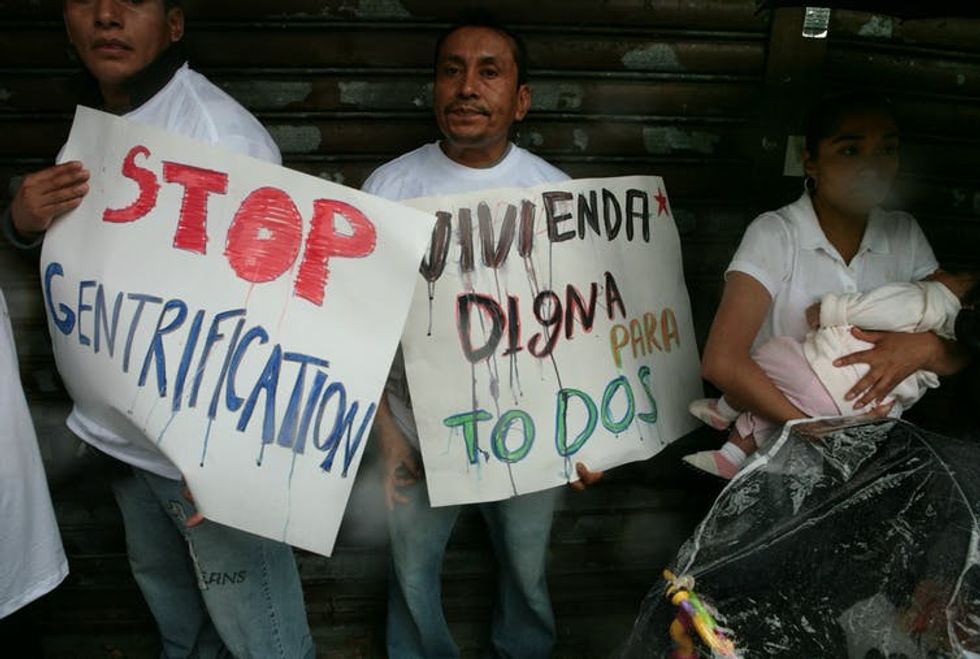 Tenants being pushed out on account of rising rents in Harlem in 2007.

Researchers once focused on the experiences of those negatively affected by gentrification. For example, one study of the Williamsburg neighborhood of Brooklyn found that gentrification commonly removed manufacturing from inner city areas, leading to blue-collar workers losing urban job opportunities.

Another study found that gentrification was associated with increased social hardships for residents. Not only did their housing expenses rise, social networks disintegrated as neighbors were forced to move elsewhere. In an examination of seven New York neighborhoods, for example, the researchers found that half of the poor households who had remained in gentrifying areas were paying more than two-thirds of their income for rent.

Where gentrification research once focused on evictions of low-income and working class residents, housing affordability problems, and torn social fabrics caused through changing neighborhoods, the talk has since turned to the experiences of the middle classes who are doing the gentrifying.

Terms like “competitive progress” and “regeneration, revitalization and renaissance” of urban neighborhoods are commonly used to describe a process whereby physically distressed areas of a city have their buildings renovated and updated.

Urban planner and best-selling author Richard Florida also focuses on the gentrifiers. In his much discussed 2002 book, Florida maintains that cities with a large gay and “bohemian” population of artists and intellectuals tend to thrive economically.

He calls this group of hip and affluent urbanites the “creative class,” and states that they are responsible for a city’s economic success. When Florida’s book came out, city leaders throughout the United States quickly seized on his ideas to promote their own urban renewal projects.

When researchers and urban leaders focus on the gentrifiers, the displaced poor and working class are doubly erased – from the gentrifying areas they once called home, and with few exceptions, from the concerns of urban policymakers.

The need to restore happiness

Amazon’s move to Washington and New York along with an influx of well-paid employees brings us back to the question of how we might apply the ethical concept of utilitarianism to understand the greatest balance of happiness over suffering for the greatest number of people.

In my view, this number must include the poor and working class. In an area threatened by gentrification, the economic and social costs for displaced residents is typically high.

To make ethical decisions, we must consider the people who suffer the consequences of rapidly rising costs in the area they call home as part of the ethical equation.

This story was produced in partnership with Type Investigations, with support from the Fund for Constitutional Government.

SAN LUIS, ARIZONA — The small city of San Luis is tucked away in the far corner of Arizona, closer to Mexico than to any major U.S. city. The community is nearly 95% Latino and tight-knit — the type of place where you know your neighbors and their parents and cousins.