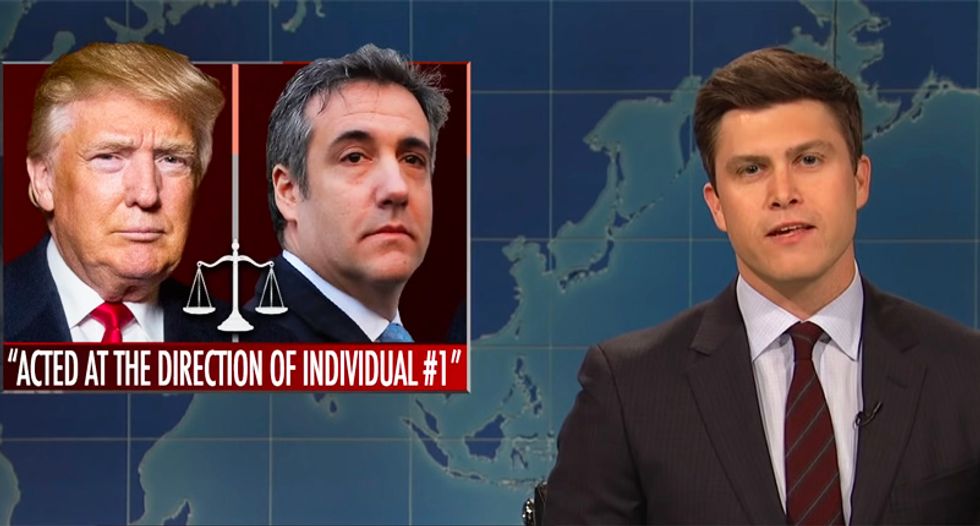 The co-hosts of Saturday Night Lives' "Weekend Update" were all over President Donald Trump for blithely saying there was nothing in Robert Mueller's latest findings and pretending that he is not the  "Individual-1" mentioned frequently in the filing.

“This week, Robert Mueller released the teaser trailer for 'Trump: Endgame,'” reported Colin Jost, with a smirk. “Federal prosecutors said Friday that Michael Cohen committed two election-related crimes at the direction of a person identified as ‘Individual-1.’ Now, we don’t know exactly who ‘Individual-1’ is, but let’s just say things are getting tense right now at Individual-1 Tower.”

“At some point, if every single person you hired gets indicted, the odds are that you had something to do with it,” he continued. “I mean, if all of Santa’s elves and all of Santa’s reindeer got busted by the Feds you wouldn't expect Santa to tweet, ‘Totally clear for Christmas. Thank you!’”

Co-host Michael Che then got in his shots by bringing up Rudy Giuliani's rumored "counter-report."

“Nothing says ‘you’re guilty’ more than making a counter report before the Mueller report is even out. That means he knows it’s gonna be bad,” Che explained. “It’s like when you’re watching 'Cops' and, as soon as they pull up to the house, there’s a shirtless guy on the lawn saying: ‘Okay now, first off, she’s lyin’’.”