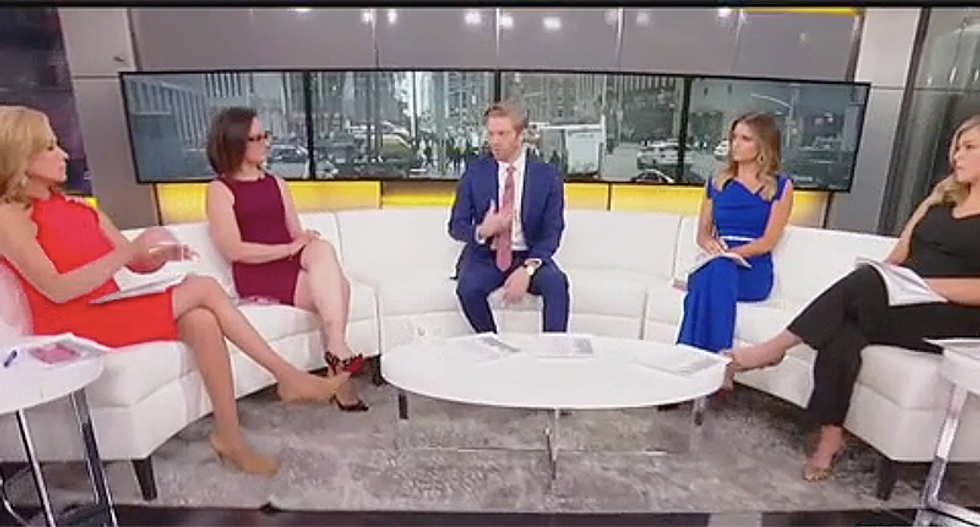 In a bizarre Fox News conversation, hosts on "Outnumbered," decided that condemning bigotry is the same as neo-Nazis and white supremacists.

The conversation was about Rep. Ilhan Omar (D-MN) and the recent decision for Congress to pass a bill condemning anti-Semitism. The Republican Congress refused to do the same in wake of the Charlottesville rally, which is prompting many to conclude this is all about politics.

Former speechwriter to Eric Holder, Jake Maccoby, explained that as a Jewish person he resents being used by the GOP to make a political point.

"I think a lot of the conversations going on right now are just disingenuous," he said. "You've got the same people who stood behind Donald Trump when he said that they were 'good people on both sides' in Charlottesville. These are the same people who turned a blind-eye to Rep. Steve King (R-IA) for ten years. The same people who have been dog whistling to their supporters every time they are up for reelection, saying, 'How dare you attack my friends, the Jews?' Frankly, it's pretty insulting to watch that happen."

"I come, as a Jewish person, frankly, would rather make allies and have conversations and be able to help turn down the temperature on this than to sort of have our first reaction be one of rage and anger and frustration," he continued.

Conservative podcaster Allie Beth Stuckey claimed that not all Republicans stood beside Trump when he said there were "good people on both sides" of Charlottesville.

"So if you want to take that argument and kind of put it on its head, that's exactly what Democrats are doing now. They were really against present traversing their refund people on both sides. Rep. Nancy Pelosi (D-CA) is saying, 'We are not going to include her name in this resolution,' when this is about her. And 'Oh, by the way, will include other forms of bigotry.' That is exactly like President Trump. Shamefully, I believe saying there are fine people on both sides. So if you didn't like it then, you should be doing it now."

Maccoby cut in to say that there is a big difference between Omar and defending neo-Nazis marching.

"Hang on a second. And defending neo-Nazis," Maccoby tried to cut in while Stuckey talked over him.

"What do anti-semites and neo-Nazis have in common?" Fox host Kennedy cut in to ask.

"If you are saying that she is the same as neo-Nazis --" Maccoby said.

"I think Jewish people are targets of the rage and neo-Nazis. That's incredibly unfortunate," Kennedy said. "I think you should take a much firmer stand against this kind of language."

Stuckey agreed, however, neither of the women are Jewish.

Watch the bizarre exchange below:

Ukraine on Wednesday accused Russia of carrying out rocket strikes that killed 13 civilians in areas near a nuclear power plant, as the G7 warned that Russian control of the facility "endangers the region".

The overnight strikes in the Dnipropetrovsk region in central Ukraine also injured 11 people, with five reported to be in a serious condition.