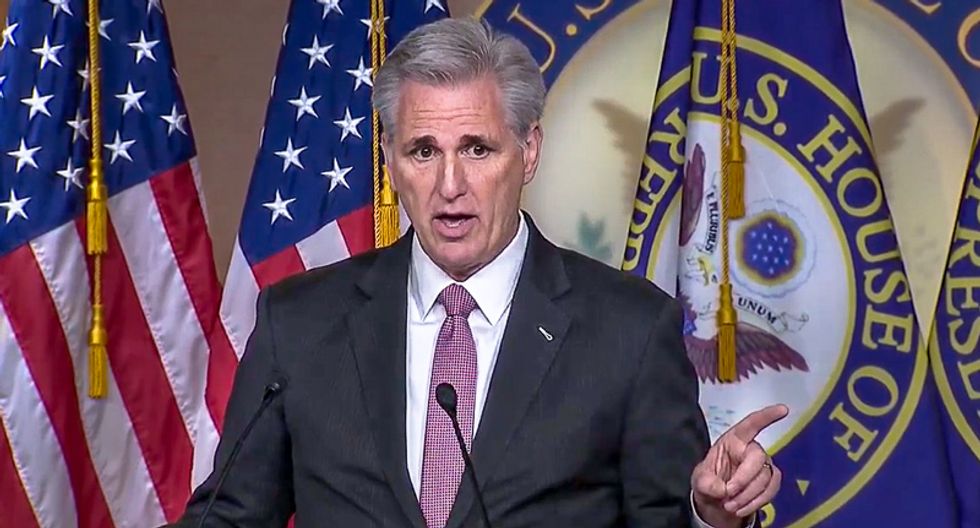 MSNBC reporter Matt Miller called out Republican minority leader Kevin McCarthy for making a false comparison between what the Russians did to the United States and a British person creating an opposition research document.

In a panel discussion responding to the Thursday press conference for the House Minority, McCarthy claimed that Russian intervention in our election was the same as Christopher Steele putting together a document with research about President Donald Trump's international connections. That document was then turned over to the FBI when it was clear it included information about possible crimes.

However, in an ABC interview Wednesday, the president said that the FBI is "wrong" to demand they be alerted if foreign interference were to occur again.

"It really kind of saddens me to see the top Republican in the House come out and just, you know, show such moral cowardice," he said. "And then to just to say things that are not true. The Steele dossier -- it’s legal for a campaign to hire a foreign individual -- to hire someone to pay them to conduct research or do other things for you. Campaigns do that from time to time. That’s what the DNC did."

What Trump did, however, was not legal.

"It’s illegal to accept help from a foreigner," Miller continued. "And especially more so — even more inappropriate if that help is coming from a foreigner working on behalf of a foreign government, which of course is the meeting that Donald Trump Jr. took."

But when McCarthy called it a "hypothetical" scenario, Miller flattened the claim, saying this is exactly what happened in 2016. Special counsel Robert Mueller uncovered the conspiracy and indicted individuals.

"When he says it’s a hypothetical it’s not a hypothetical the president was discussing last night," Miller went on. "The question was about the meeting his son took after being told it was on behalf of the Russian government. And with respect to his comments about Rep. Adam Schiff (D-CA): Adam Schiff in accepting information from a foreign individual, it wasn’t in a campaign context. It was in the context of conducting an investigation. Where, of course, you seek information from anyone that can give it to you. That’s very different than in a campaign context when you’re trying to get someone elected to office."