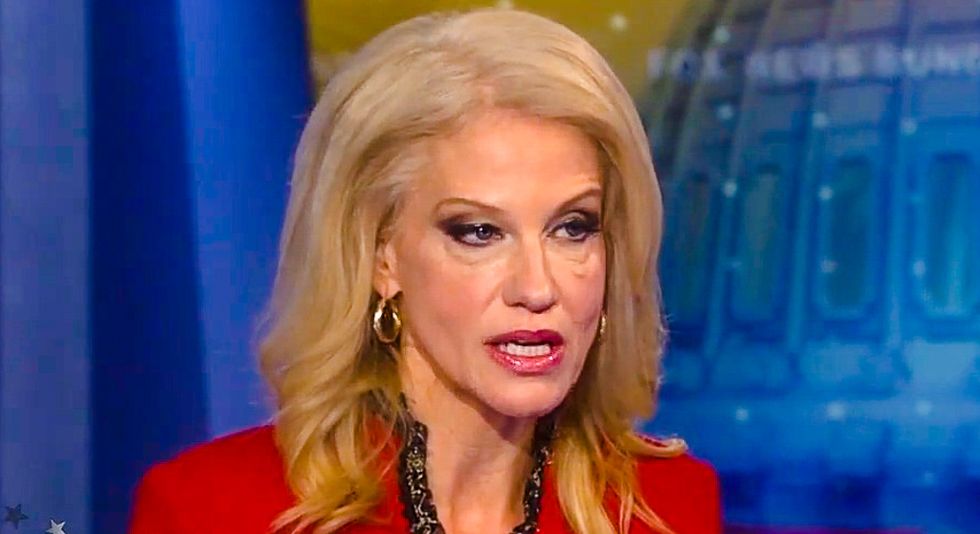 Addressing a report from the Justice Department's Office of Legal Counsel recommending White House counsel Kellyanne Conway should be fired for flagrant violations of the Hatch Act, the Washington Post editorial board hammered President Donald Trump's confidante over her smirking response.

"Conway is well-versed in long-standing ethics law that bars federal employees from engaging in partisan politics while on the job," the editorial begins. "Restrictions of the Hatch Act have been spelled out to her in formal training, individual conversations and multiple written communications by the Office of White House Counsel. She simply doesn’t care that she violates the law. 'Blah, blah, blah. . . . Let me know when the jail sentence starts,' she quipped to a reporter. "

According to the Post, that puts her on the same level as her above-the-rules boss, Donald Trump.

"Even worse than her breathtaking arrogance is that the president she works for — and on whose behalf she regularly and belligerently violates the Hatch Act — cares even less about the rules," the editorial continues.

"President Trump made clear Friday that he had no intention of following the recommendation of a watchdog government agency that Ms. Conway be fired for her 'egregious, notorious, and ongoing' Hatch Act violations," the piece added, citing the OLC report.

Adding, "given Mr. Trump’s disdain for the norm and the premium he places on slavish devotion to him, it’s no surprise he didn’t fire Ms. Conway but instead rose to her defense," the board commended Trump administration official, special counsel Henry J. Kerner who issued the damning accusations.

"Credit, though, to Mr. Kerner, who was appointed by Mr. Trump, for his clear-eyed examination of the issues and unprecedented recommendation to fire someone in such a high-profile position. Calling out Ms. Conway’s egregious behavior and the danger it poses serves as a rebuke not just of Ms. Conway’s actions but of the president as well," the editorial concluded.