In a tweet that will likely be pulled down and corrected (update: a corrected tweet has been published), Donald Trump rushed to the defense of Supreme Court Brett Kavanaugh on Sunday morning over a new report of credible allegations the jurist may have sexually assaulted another woman when he was in college.

In a two-part tweet, Trump wrote, "Now the Radical Left Democrats and their Partner, the LameStream Media, are after Brett Kavanaugh again, talking loudly of their favorite word, impeachment. He is an innocent man who has been treated HORRIBLY. Such lies about him. They want to scare him into turning Liberal!," he wrote, before adding "Brett Kavanaugh should start suing people for liable, or the Justice Department should come to his rescue. The lies being told about him are unbelievable. False Accusations without recrimination. When does it stop? They are trying to influence his opinions. Can’t let that happen!"

Twitter users were quick to pounce on the president for writing "liable" instead of "libel." 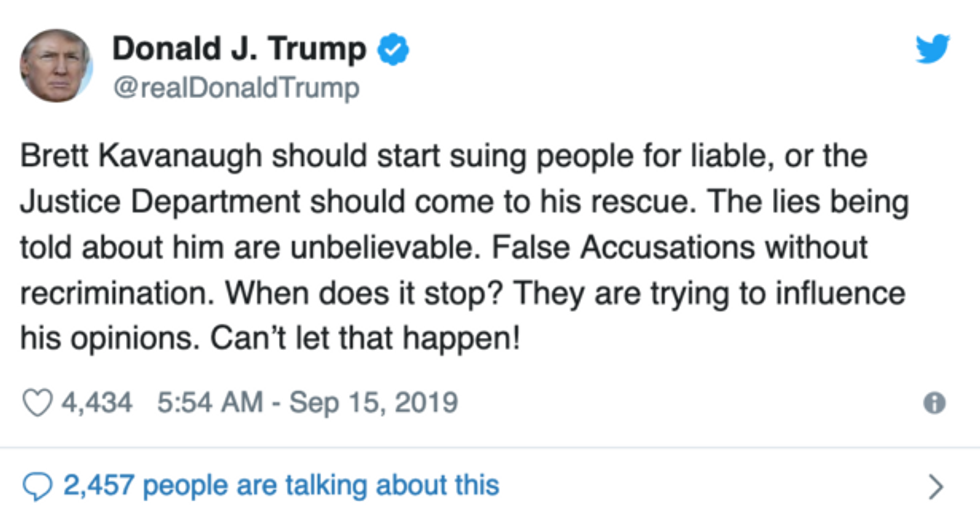 A sampling below along with Trump's tweets:

@realDonaldTrump Imagine being the guy who claimed Ted Cruz’s father killed JFK and Obama wasn’t born in the US and… https://t.co/rxvwByPE7N
— Adam Best (@Adam Best) 1568553604.0

@realDonaldTrump You're liable to say something demented every time
— Peter Feld (@Peter Feld) 1568552104.0