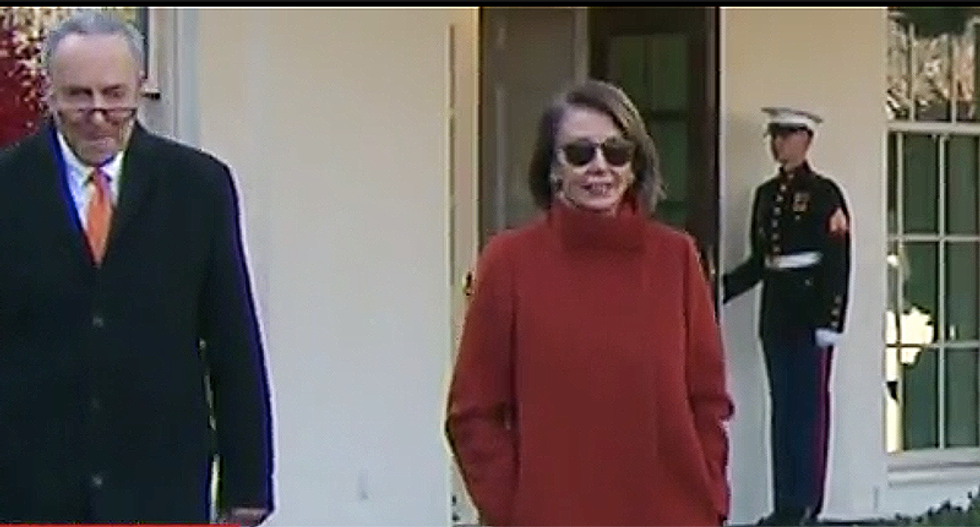 The White House posted a series of photos of House Speaker Nancy Pelosi (D-CA) Wednesday after their meeting, showing Pelosi being the only person in the room literally standing up to President Donald Trump. It was an image that baffled the mind of at least one CNN panelist as to why the Trump people would be promoting Pelosi.

According to reports from those who were in the room, the president flew off the handle after Pelosi quipped that it seems all roads lead back to Russia for this president. It was at that point that Trump called Pelosi a "third-grade politician," though presumably, he meant "third-rate," and the meeting broke apart.

"I got to say, I mean, just as a political decision, you got to wonder what was going through the minds of the White House or President Trump, you know, to post that particular picture because not only does it show Nancy Pelosi looking like she’s taking command of this room full of mostly men —" said New York Times reporter Michael Shear before being cut off by CNN host Don Lemon.

"Is it the same that wrote that letter, then thought releasing it would be somehow exculpatory?" asked Lemon, noting later than it wasn't exactly the smartest decision to release such an absurd letter to the public.

"Well, right. I mean, I suppose we shouldn’t be surprised," agreed Shear. "To me, the fact that the Pelosi people put that kind of owned that photo by putting it on her Twitter feed at that point says it all. I mean, this is not a photo that, you know, conveys the strength that you would think a president would want to convey and in fact, it’s the opposite. He looks almost subservient to Nancy Pelosi and strains the logic to think that would be something you would put out, but as you know, there is a lot about President Trump that’s strange to logic and his Twitter feed is only one of them."

Watch the analysis below: