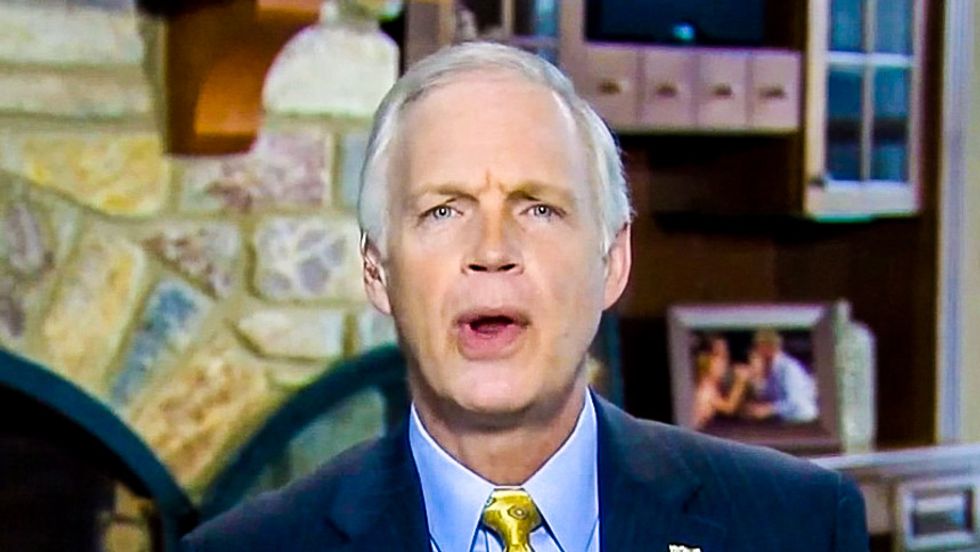 According to a report in the Washington Post, Sen. Ron Johnson (R-WI) has now been tied to a Ukrainian diplomat who has been promoting a debunked conspiracy theory that claims Ukrainian officials assisted Hillary Clinton’s 2016 presidential campaign.

In an interview, Andrii Telizhenko admitted he met with Johnson -- one of Donald Trump's most avid defenders -- and his staff for more than five hours in July.

According to the report, "the discussions focused in part on 'the DNC issue' — a reference to his unsubstantiated claim that the Democratic National Committee worked with the Ukrainian government in 2016 to gather incriminating information about then-Trump campaign chairman Paul Manafort. Telizhenko said he could not recall the date of the meeting, but a review of his Facebook page revealed a photo of him and Johnson posted on July 11."

“I was in Washington, and Sen. Johnson found out I was in D.C., and staff called me and wanted to do a meeting with me. So I reached out back and said, ‘Sure, I’ll come down the Hill and talk to you,’ ” Telizhenko said during his interview.

The Post notes, "The senator’s committee assignments place him at the center of U.S.-Ukraine policymaking: Johnson is chairman of the Foreign Relations Subcommittee on Europe and Regional Security Cooperation and vice chair of the Senate Ukraine Caucus, a bipartisan group formed in 2015 to boost ties between Washington and Kyiv. He is also chairman of the Homeland Security Committee, a panel with investigative powers," before adding, "More significantly, testimony from two blockbuster witnesses in the impeachment probe place Johnson at episodes that will be critical in assessing whether Trump was withholding nearly $400 million in congressionally appropriated military aid to Ukraine in exchange for political favors."

This isn not the first time Johnson has been implicated in Trump's Ukraine dealings, once questioning Trump about withholding aid.

Johnsons's contact with the Ukranian could implicate him in the scandal engulfing the White House that led to the impeachment hearings and also threatens the careers of Secretary of State Mike Pompeo and acting White House chief of staff Mick Mulvaney.