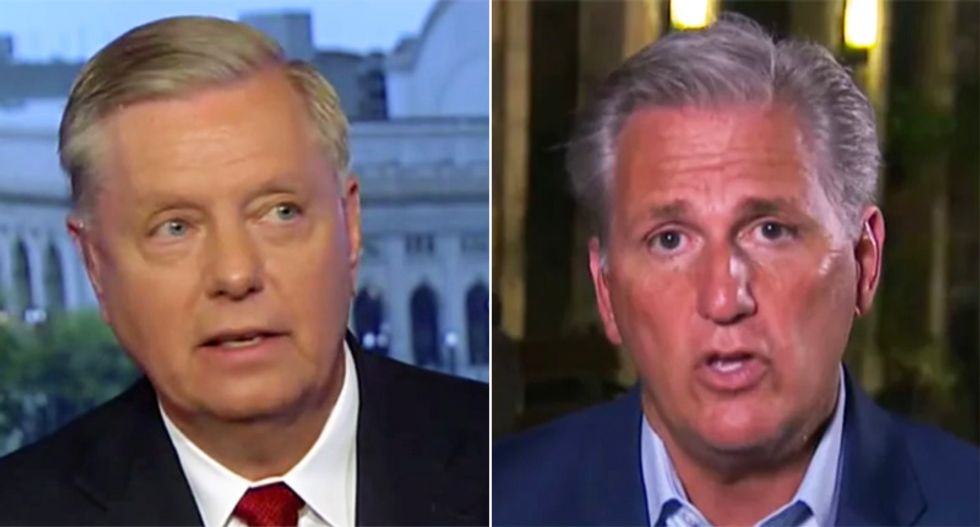 A CNN panel discussing Donald Trump's call to China for help finding dirt on former Vice President Joe Biden pointed out that Republicans are now in a new and even more "terrible' position" than they were just a few days ago as impeachment proceedings have sped up.

"I think what it does it signals a change in his strategy and the White House strategy," Lockhart explained. "The strategy they had been pursuing was completely unsustainable. The president admitted to something and then they tried to discredit the people who were accusing the president of something he admitted to. A second-grader could figure out that that argument wasn't going to work for very long."

"So what he's done here, he's done this in the past," he continued. "He's basically going out and saying, 'I did it, I'd do it again and there's nothing wrong with it,' and this is not a legal case."

"The problem with this is this puts Republicans in Congress in a terrible position," he later added. "You can't, with a straight face if you're a serious member of Congress who has any respect for the rule of law and the traditional norms of the presidency, defend this. But the president doesn't care. He doesn't care what he does with anyone around him."

CNN special correspondent Jamie Gangel piled on, saying Republican lawmakers will not want to back the president, particularly when combined with Wednesday's Trump meltdown when pressed on his Ukraine phone call.

"So we're hearing that they are trying to get the White House strategy together and I was told by multiple sources that Jared [Kushner] is now involved in it," Gangel explained. "But the reality, as Joe said, is the Republicans on the Hill are not going to want to carry that water -- that is not good for them."

"One source said something interesting to me about Jared coming on board. The person said, the most helpful thing for messaging would be for Trump to stop tweeting and having -- and having press conferences like this," she added as the panel began laughing.