'It takes a small mind to want to out a whistleblower': Rachel Maddow blasts Trump and GOP 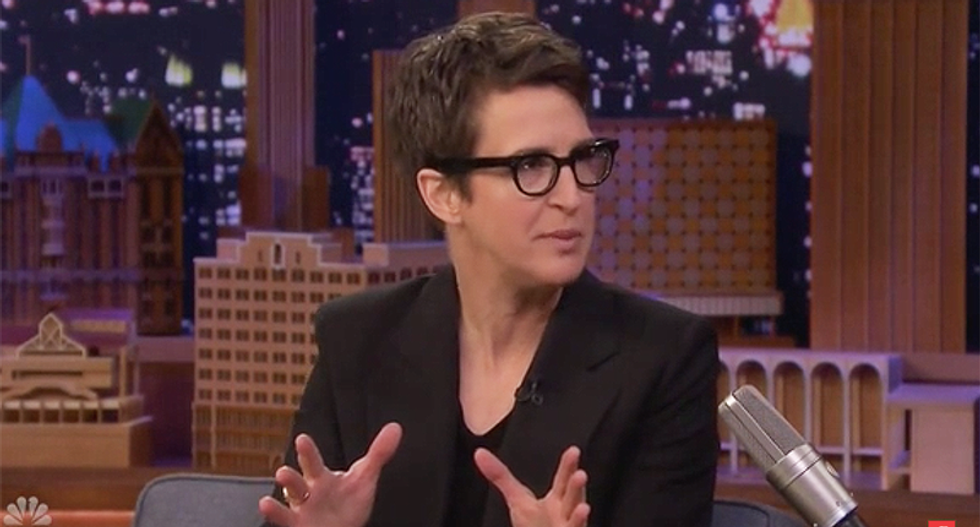 In an analysis of the first day of impeachment, MSNBC host Rachel Maddow explained to late-night comedian Jimmy Fallon why the impeachment hearings were a lot more rational than she anticipated.

Rep. Jim Jordan (R-OH) switched committees just to appear and ask questions and Rep. Devin Nunes (R-CA) humiliated himself, but aside from that, Maddow said she was surprised there were reasonable questions, and everyone remained calm.

"I think the really good news is that it was kind of calm like, it could have been a crazy circus, people could have pulled anything and instead it kind of proceeded like a normal hearing," Maddow said. "And these were witnesses who had a story to tell and who told it with incredible dignity and gravitas, and yes, some of the questioning was stupid, but almost all of wasn’t."

She explained that she was hoping that the members could simply come together and be rational, fact-based, and calm without witness intimidation and name-calling. She was pleased members were honestly giving

She then went on to explain why the inquiry is important because what happened is illegal.

"So, you can’t solicit something from a foreign entity to benefit the next U.S. election," Maddow explained. "You can’t go to any foreign entity and say, 'Hey, give me some help in this next election.' You can’t ask whether or not you get it; you cannot solicit anything of value from a foreign entity for use in a U.S. election. And President Trump and his personal attorney, Rudy Giuliani, admit they did that they went to Ukraine and they said, 'We want investigations of Joe Biden. And we want investigations of the Democrats.' And Giuliani just flat out admits, 'The reason I want that is because it would be a value to my client.' Well, that sounds great on TV. Also, that’s it’s a crime!"

She explained that it's clear they admitted to it because they don't believe it should be a crime, whether or not it actually is.

She went on to say that Constitution doesn't exactly lay out what is impeachable and what constitutes "high crimes and misdemeanors," other than anything could fall under that category.

"They aren’t laid out in terms of specific statues, but a president trying to get help from a foreign country against his political rivals here is not only wrong, it’s not only criminal, it is definitely impeachable conduct, and they admit that," Maddow said. "And so how are we going to proceed as a country toward deciding whether or not he gets impeached and removed from office? Well, we saw day one of that effort today, and they are calmly elucidating the facts."

When it came to the whistleblower being outed, she struggled to find a nice way to say what she thought.

"Turns out what the whistleblower was worried about actually did happen on the call, and it was looked into, and it turns out it was even worse than the whistleblower said," Maddow explained. "So, now it takes a really — I think — it — what’s the nice way to say this... It takes a small mind to look at that set of circumstances and be like, 'We better out that whistleblower.' The whistleblower was correct. The whistleblower was drawing attention to something that happened in the administration that did turn out to be a real problem. And if you’re going to try to vilify and punish and chase around and retaliate against that person, that’s not illegal, it’s fundamentally unfair, and it’s something that I think every American should sort of be horrified by."