Spare us from the Vichy Republicans 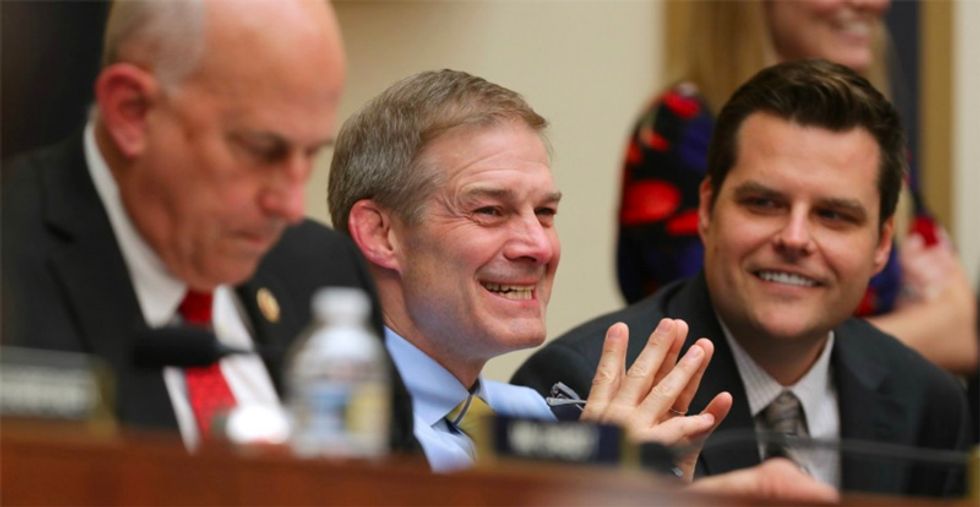 Item: Bob Livingston. Remember him? When last seen by the wider public in the waning, innocent years of the 20th century, he was the newly minted designee to succeed Newt Gingrich as Republican Speaker of the House.

But he abruptly resigned after it was revealed (thanks to the public service of Larry Flynt) that he had indulged in extramarital affairs. This was something of an inconvenience, given that he was tapped to lead the charge of the light brigade against incumbent President Bill Clinton, impeaching the latter because of his shocking dalliances outside matrimonial bonds.

Unlike you or me in similar circumstances, Livingston, a cog in the great clockwork of Republican influence-peddling, landed on his feet. Founding a lobbying shop modestly named the Livingston Group, he developed a brisk business of green-washing dictators (such as Muammar al-Gaddafi and Hosni Mubarak), fighting against formal recognition of the Turkish genocide of Armenians in World War I, and other worthy causes of clients with money.

"Today's GOP has become a creepy mashup of grade B totalitarianism and perverted Freudian manias disguised as family values."

Who could have imagined that Bob Livingston would link up with Giuliani and Associates to press the case that the United States needed to dump our career diplomatic personnel who actually knew something about Ukraine in favor of more transactional go-getters who would vigorously press the case that Kiev needed to get on board the Trump reelection campaign?

If you knew Livingston back in the day, you certainly could imagine it, because of course you could. Bob is the breed of Republican that Reagan inspired and Gingrich liberated, the breed that believes it’s all mine, the public be damned, accompanied by a hundred sermons from Ayn Rand and Milton Friedman. The breezy sunlit uplands of their dearest ideals are carpeted with money, soon to be whisked off to an offshore tax haven.

Will Bob end up at a witness table before the House intelligence committee, or in the stand at a grand jury proceeding? Who knows? He is just one element of the massive conservative infrastructure that weighs upon and dominates Washington like some monstrous stone idol. Future historians will boggle at the sheer numbers of the Republican establishment involved in covering up Trump’s illicit activities.

Item: By now, everyone who follows politics has heard of Lev Parnas and Igor Fruman, two Ukrainian “businessmen” (but only in the sense that Al Capone or Lucky Luciano were businessmen) who were arrested at Dulles airport while attempting to flee the country. Embarrassingly, they were business chums of Nosferatu-lookalike Rudy Giuliani, our very own president’s personal lawyer. They face charges of making illegal political campaign contributions.

But thanks to a local Michigan political blog, we now know that Parnas also traveled the country campaigning on behalf of Republican candidates. Not only has he been photographed several times yukking it up with Giuliani and the local GOP Great White Hope, but the events he attended often coincided with contributions made by someone with a name that looks suspiciously like Fruman’s, with two letters transposed.

Proving what—aside from providing additional clues about illegal contributions by a foreign national? Parnas and Fruman also acted as agents of Dimitry Firtash, a Ukrainian billionaire described by federal prosecutors as an organized crime associate. He made most of his money extracting vigorish from the Russia-Ukraine natural gas trade.

It is difficult to imagine Firtash obtaining such a lucrative cash cow without being a de facto agent of the Kremlin; in fact, Putin advanced him an $11 billion credit line to buy influence in Ukrainian politics. Oh, he was also an associate of Paul Manafort. Remember him?

Firtash is currently in Vienna, fighting U.S. extradition charges that include bribery, racketeering, and money laundering. And, behold, Joe DiGenova and Victoria Toensing, the Nick and Nora Charles of GOP dirty operatives, have signed up to help defend this poor, friendless billionaire. Who could have imagined?

The tentacles of Russian organized crime, both the official kind emanating from the Kremlin and the more informal sort consisting of laundering hot cash into real estate, have slithered more deeply into the American heartland than most people realize, and it has colonized the Republican Party at the state and local level. The revelation that the National Rifle Association—variously described as an arm of the GOP or as the party’s master—was virtually taken over by Russian interests is just the tip of the iceberg.

The GOP, which loves to shriek from the housetops about its patriotism, is about as independent of hostile foreign influence as Vidkun Quisling’s Nasjonal Samling or Oswald Mosley’s British Union of Fascists. Or, for that matter, France’s Vichy Republic, ever subservient to Nazi Germany.

Item: The other day, I had lunch with the Washington correspondent of a respected overseas newspaper. He recounted that he recently had covered an event at which Greg Murphy, a Republican member of Congress from North Carolina, was in attendance. The member was very loquacious in support of the imaginary “fact” that Republicans were totally shut out of the hearings pertaining to the impeachment inquiry.

The correspondent gently remonstrated that it was public knowledge that any Republican who was a member of the three committees making the inquiry could and did take part in the proceedings. The member then merely repeated, with greater emphasis, that the Republicans were “shut out.” The journalist described the congressman’s face as having changed to something like an android, with blank eyes and a fixed stare. On cue, he had transformed himself into a zombie.

It did not help that the event occurred in a NATO ally’s embassy, where the congressman pounded the table and announced to all and sundry that he was so ashamed of liberals in this country gleefully burning American flags. What?

The correspondent speculated to me that there were, in fact, recent televised scenes of flag burnings, but they were staged by Kurds in Syria disgusted at their betrayal by the president on whose behalf the congressman had lobotomized himself. In the congressman’s mind, facts and reality were infinitely fluid, and perhaps the Kurds might as well have been the liberals who haunt his dreams.

He was all too typical of today’s Republican politician: whether he was attempting to gaslight his audience or whether he actually believed what he said is impossible to determine and probably irrelevant anyway. Like a Scientologist, his ideas cannot be rationally debated. It is best simply to avoid the species: insanity is contagious.

What are we to make of all this? The notion, beloved by the press, that Trump holds Republicans in a kind of thrall, like the Klingons’ tractor beam, does not withstand scrutiny, because there is no evidence that the GOP will resume normal behavior once the beam is switched off. They have been getting crazier and crazier for years, which is why I departed Capitol Hill in 2011 to spread the news to all who would listen.

Republicans have now become seriously deranged, and even more cult-like. Louie Gohmert, once a comical outlier, but now the heart and soul of his party, is invoking civil war as a remedy to the potential impeachment of his beloved Führer. And for sheer cringe-inducing weirdness, nothing matches the GOP’s fixation with abortion once they achieve power, which has now reached an almost unbelievable stage of sick obsession in Missouri. Today’s GOP has become a creepy mashup of grade B totalitarianism and perverted Freudian manias disguised as family values.

Once, I called them an apocalyptic cult, which they were and are. But in those relatively naïve days, even I underestimated their growing appetite for crime, betrayal, and certifiable lunacy.