Trump aides frantically stalling president from naming whistleblower on Twitter: 'It is not a matter of if but when' 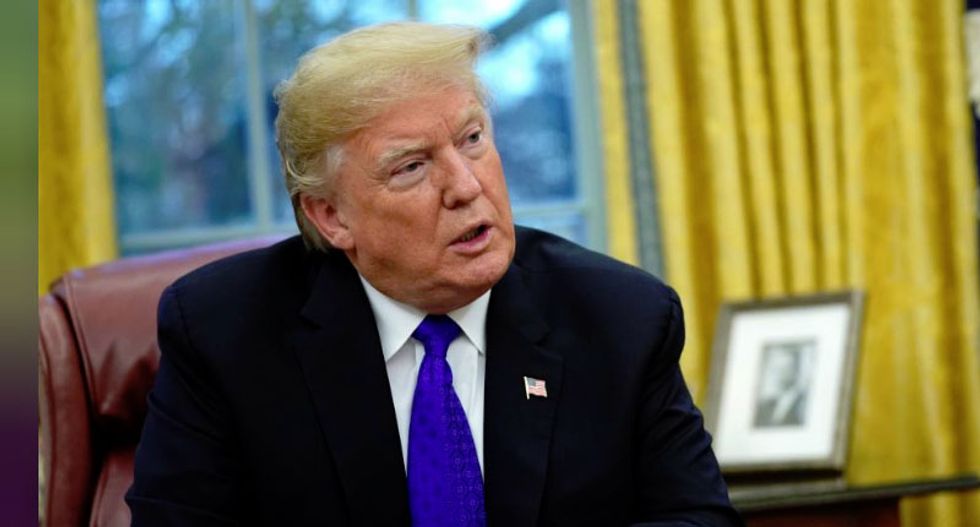 While Fox News and all the major news outlets are refraining from naming the person who is presumed to be the whistleblower whose complaint became the genesis for the House impeachment hearings on Donald Trump, top White House staffers are afraid the president will tweet the name out, setting off a firestorm.

According to a report at The Daily Beast, Trump is aware of a name being bandied about by rightwing websites and has yet to link to the stories, but as his impeachment hearings become a reality there is a fear that he will blurt the name out.

"Since learning the name, the president has gossiped on numerous occasions about this individual’s biography and alleged political biases with confidants, friends, lawyers, administration officials, family, and cable-news personalities, according to four people with knowledge of the conversations," the report states. "He’s spoken to so many people behind the scenes about the whistleblower, many of those close to the president are genuinely surprised he hasn’t already tweeted, retweeted, or publicly uttered the name, given his colossal public fury at the still-unnamed individual and his lawyer."

According to the report, those leading the charge to dissuade the president from tweeting out the sensitive information includes White House counsel Pat Cipollone and Ivanka Trump.

"Those in Trump’s inner circle—including White House Counsel Pat Cipollone and the president’s daughter and senior White House aide Ivanka Trump—have specifically told the president when asked that it would be unwise for him to publicly blurt out the name at this point," White House insiders confided to the Beast.

Additionally, Fox News host Sean Hannity -- reportedly a close outside adviser to the president -- has urged Trump to be cautious.

When asked about conversations with Trump regarding the whistleblower’s identity, the Fox News host said in an email to The Daily Beast, “I never reveal my sources.”

That doesn't mean that the president, who is infuriated about the impeachment proceedings and daily fires out tweet and after tweet calling them a "witch hunt" and a "sham," will be able to contain himself, according to some White House sources.

“It is not a matter of if but when he will say it,” said one adviser while admitting the name has been discussed. "It’s my sense he is waiting for more cover from others before he does.”

Longtime GOP strategist Ed Rollins said he personally would have no problem with the president outing the whistleblower.

“I think the president has probably been warned that you’re not supposed to name the [alleged] whistleblower,” Rollins said. “But the name’s been out there… Whether you can fire him or not, I don’t know, but you certainly could identify him, and criticize him, and House Republicans should demand that he testify. He’s the one who started this thing… I’d certainly make his life miserable.”