What Zelensky knew: The devastating and darkly ironic impact of Trump’s attempt to bribe Ukraine 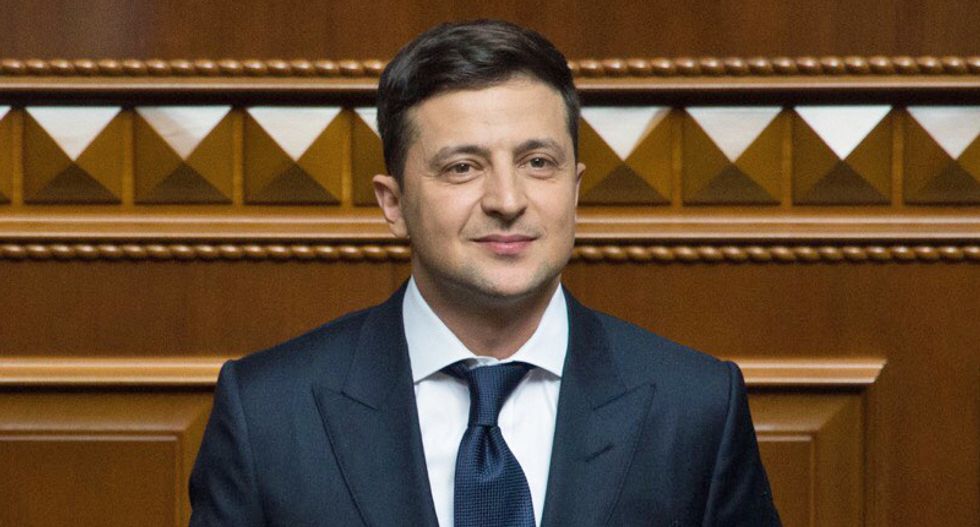 In their effort to exculpate President Donald Trump in the impeachment inquiry, Republicans put Ukrainian President Volodymyr Zelensky’s denial that he ever felt pressure from the White House to open up investigations into Democrats at the center of their argument. A new GOP memo says that both leaders have acknowledged “there was no pressure” on the famous July 25 call that sparked the inquiry and thus argues that the allegations made by Democrats that Trump abused his power don’t hold.

But while Zelensky has, in fact, claimed that he didn’t feel any pressure from Trump, the call memo itself and subsequent reporting and evidence tell a much different story. Instead, it’s clear the Ukrainians felt the pressure of a months-long campaign to pressure them into launching probes of Trump’s political enemies — a corrupt and corrosive effort that left a devastating impact on Zelensky’s young administration.

It’s important to return to the call memo because Trump and his allies have committed themselves to lying profusely about it. They claim it shows Trump never did anything wrong, but it shows the exact opposite. As even former Trump official Nikki Haley has admitted, even just asking a foreign power for an investigation into a domestic political opponent is grossly inappropriate. This alone was the basis for House Speaker Nancy Pelosi’s decision to announce an impeachment investigation into Trump — before the evidence that Trump was explicitly trying to extort and bribe Ukraine emerged.

And that’s what most of the analysis of the call memo has rightly focused on — Trump’s own words. He used the damning phrase “I would like you to do us a favor though,” in response to Zelensky’s request for military assistance. This directly sets up the quid pro quo, the crucial element of a bribe. Other textual evidence also makes clear that this was what Trump was intending. Trump said “I will say that we do a lot for Ukraine” and “I wouldn’t say that it’s reciprocal necessarily because things are happening that are not good.”

But Zelensky’s comments are also important. They are, frankly, ingratiating and sycophantic. Trump may think this is just a natural way for people to talk to him, but it’s clear in the call that Zelensky is bending over backward to laud Trump and to win him over. After Trump says Ukraine hasn’t necessarily reciprocated the United States’ generosity, Zelensky said: “Yes, you are absolutely right. Not only 100%, but actually 1000%.”

He then further echoes Trump’s words and worldview, saying: “It turns out that even though logically, the European Union should be our biggest partner but technically the United States is a much bigger partner than the European Union and I’m very grateful to you for that because the United States is doing quite a lot for Ukraine.” These comments even left Zelensky in the position of needing to do damage control with his European neighbors after the call memo was released, CNBC reported.

Zelenksy also said that his people were “hoping very much” to meet with Rudy Giuliani at the president’s request to discuss the investigations in question, and he echoed Trump’s negative view of the ousted U.S. Ambassador Marie Yovanovitch. And he played to Trump’s ego, saying, “Actually last time I traveled to the United States, I stayed in New York near Central Park and I stayed at the Trump Tower.” When he concluded by saying he’d work on the investigations Trump asked about, he stressed Ukraine’s economic dependence on the United States:

I also want to ensure you that we will be very serious about the case and will work on the investigation. As to the economy, there is much potential for our two countries and one of the issues that is very important for Ukraine is energy independence. I believe we can be very successful and cooperating on energy independence with United States. We are already working on cooperation. We are buying American oil but I am very hopeful for a future meeting. We will have more time and more opportunities to discuss these opportunities and get to know each other better. I would like to thank you very much for your support.

It is, therefore, untenable to believe that Zelensky felt no pressure from Trump’s request. He was clearly willing to say whatever he needed to make Trump happy in the moment. So why didn’t Zelensky say later, when asked at a UN joint press conference with Trump on Sept. 25, that he felt pressure on the call? For the same reason he said he stayed at Trump Tower: to make Trump think he was on his side.

Republicans also said that Zelensky didn’t know about the hold Trump had placed on the U.S. military aid at the time the July 25 call, suggesting that Trump’s act therefore couldn’t be corrupt. And while it seems to be true that Zelensky was still in the dark on July 25, it’s hardly relevant. Zelensky clearly knew a lot was on the line, and texts from Trump officials show that the Ukrainians knew a White House meeting — which could be a big boost to a fresh-faced Ukrainian president — hung in the balance. The New York Times also reported, and witness testimony corroborates, that the Ukrainians found out there was a hold on the U.S. aid at some point in early August before the issue was made public. At that point — and later, when the hold was widely known — the whole Ukrainian government was under Trump’s thumb.

The Associated Press has even reported that Zelensky and his aides felt pressure about the demands to investigate Biden as early as May, even before the funds were even withheld.

And while this is enough to refute the Republicans’ arguments in Trump’s defense, there’s also a more deeply tragic and ironic thread in this story.

Zelensky is, much like Trump, a TV star and comedian who surprisingly became his country’s president. But he became president at a dark time in his country’s history for serious reasons: the political establishment in his country has long been plagued by corruption, much of which stems from Russian influence. As an outsider from the system, Zelensky ran and won on a platform of anti-corruption, which he has been working to fulfill.

But despite the U.S. government’s assessment that Ukraine was making significant progress fighting corruption, Trump twisted this legitimate concern in the country to become the cover story of his demand for political investigations into his own domestic rivals. This is the cruel irony in the story: Trump’s fake concern for corruption masked a wildly corrupt demand, compromising Zelensky in the process.

The Times found that Zelensky’s fraught and conflicted administration deliberated over Trump’s corrupt demand, torn about whether to follow through. It explained:

Aides were arguing in favor of “bowing to what was demanded,” said Petro Burkovskiy, a senior fellow at the Democratic Initiatives Foundation who has close ties to the Ukrainian government. They were willing to do so, he said, despite the risk of losing bipartisan support in the United States by appearing to assist Mr. Trump’s re-election bid. “The cost was high.”

Finally bending to the White House request, Mr. Zelensky’s staff planned for him to make an announcement in an interview on Sept. 13 with Fareed Zakaria, the host of a weekly news show on CNN.

Though plans were in motion to give the White House the public statement it had sought, events in Washington saved the Ukrainian government from any final decision and eliminated the need to make the statement.

Word of the freeze in military aid had leaked out, and Congress was in an uproar. Two days before the scheduled interview, the Trump administration released the assistance and Mr. Zelensky’s office quickly canceled the interview.

Zelensky didn’t end up having to make the announcement, apparently through the luck of timing. But it came at a cost. The story is now public, potentially diminishing Zelensky’s stature and image. Can he still claim to be a crusader against corruption when the world knows he almost participated in Trump’s shameful plot?

And the delay of the aid and Trump’s willingness to throw Ukraine under the bus has surely emboldened Russian President Vladimir Putin, who remains at war with the former Soviet territory.

The pressure on the young administration has been real and costly, consuming time and resources and placing strain on an explosive struggle. But for Trump, these kinds of consequences hardly seems to matter — as long as he gets what he wants.